Happy New Year, everyone! How was your holiday? Do anything fun or outlandish? We didn’t do much, which was kind of nice and also necessary. Plus, being pregnant and with a toddler doesn’t leave much room for partying 😉 either way, I won’t complain. What I will do is tell you all about my weekend, though! (Linking with Katie and Erin!)

On New Year’s Eve, we were in ‘recovery’ mode. The day before I’m pretty sure Ryan was peaking on some kind of stomach bug. He wasn’t feeling solid foods still so we did about 2 days of smoothies. When he’s sick I kind of feel bad because I make him gross combos of smoothies, but he drinks it so I mean.. (for example, I made him one with rice cooked in bone broth, OJ, strawberries, bananas, blueberries, peas, spinach, broccoli, and an apple. I just threw it all in thinking, vitamins! and hoped he’d go for it ahhaha) 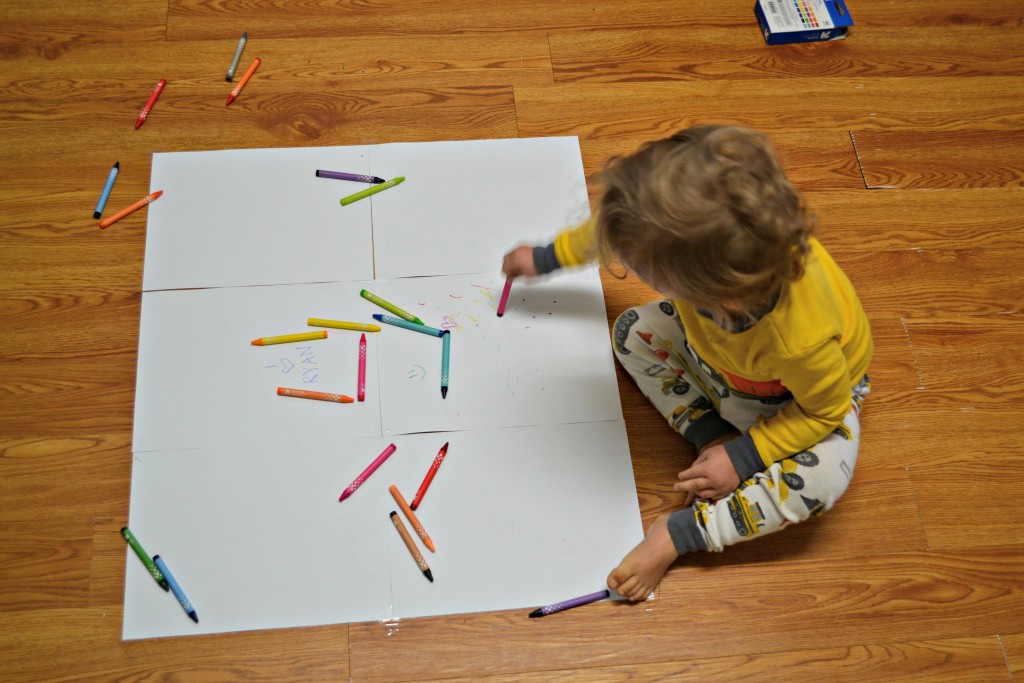 Anyway, Ryan’s been really into climbing onto the kitchen chairs and drawing (aka, stabbing my notebook with a pen) so I figured we’d give it a go with some floor coloring. I just taped some computer paper to the floor and dumped a box of crayons of the floor. He dug it, for the most part!

learning to color is fun! too bad he keeps going for the white crayon…. #toddlerlife #sickboy #coloring #crayons

We didn’t do much all day since Alex was working and Ryan wasn’t feeling too hot (neither was I to be honest) cleaning and cartoon watching were on the menu. I thought once I put Ryan to bed I’d me off duty for comforting/momming, but turns out, no so much.

I’ve mentioned before that Cooper is afraid of fireworks and not long after I put Ryan to bed, I was sending this text to Alex. (Yes, my phone is basically always almost dead.) Poor dog. As for the midnight countdown, I fell asleep on the couch with Alex, who was watching TV, at around 10. Oops. I felt pretty bad because soon after midnight the fireworks started back up and Cooper started freaking. When this happens, he starts scratching on doors and walls, especially Ryan’s room, so someone basically has to hold him until he chills. Usually i do it, but since I’m pregnant and Cooper’s almost 60 pounds, Alex took the reins (collar..) this time. I went to bed because I was still  out of it, but apparently Alex was able to get to bed by 1. Such a good hubs.

Ryan actually slept in New Year’s Day (YAY!) because he was up for an hour+ at 4 am (BOO.) so we had a late start, which I didn’t mind. We attempted Chipotle for lunch, but apparently they were closed starting Friday until Sunday? How weird is that? We ended up getting barbeque though, so could have been worse. 🙂

A car nap and a Starbucks run happened (caramel latte for me – booooo for no more eggnog lattes :() before we ran some errands and did grocery shopping. We had spaghetti and meatballs for dinner and chocolate chip cookies after Ryan went to be – one last hurrah of gluten before I cut it out.

Ryan slept in AGAIN on Saturday which was so kind of him, (I think he’s still getting over his virus/cold – runny nose and slightly higher temp than norm)  but he was so cranky! Seriously, he cried for 15 minutes and no amount of snacks/holding/tv/cuddles/showing him lights would help. Until I gave him my empty Starbucks cup. Which he loves. Kid’s weird.

There was some playing – Ryan crawled into his toy box 3 or 4 times, promptly crying once he realized he couldn’t get out by himself until I just put it on it’s side. And then he crawled on top. #toddlerlife. Saturday was actually a pretty boring day of cleaning and hanging out which I was thankful for some Sunday..

When Ryan woke up sick, again. I swear, once I stopped nursing him it feels like he’s alwyas sick. I know that it’s because he’s not getting the extra immune system bump from nursing, and right at prime cold season, but it really makes me miss nursing him. Anyway, he had a fever anywhere from 100 – 101.8, so it was a bummer. Although he was super sleepy and clingy, he was mostly happy, so it could be worse.

I officially have an obsession with making my own #handletteredprint. good thing I waited 19 months to buy one for Ryan, because making ones probably cheaper. #sundaymorning #handlettered #diy #birthannouncement

I did some work on a print I’m doing, since hand lettering is my new obsession. Plus, prints like this can cost $50+ on Etsy, and I’m cheap 😉 (Also, do you follow me on Insta? Why not?! Go do it now. I’ll wait.)

sick kids are never fun, but I'd be lying if I said I wasn't loving having one baby asleep on me and the other in my belly (kicking at his big brother) #sickbaby #momlife #momofboys #boymom #27weekspregnant #littlemoments

Then we did the normal Chipotle trip. We originally planned to knock out some errands, but when Ryan started so immediately fall asleep in the car, we decided to keep him up and head right home. Of course, he woke up from his nap after only an hour (poor kid) but I managed to get in another hour while holding him on the rocking chair.

But mostly we did a lot of cuddling and cartoons. Ryan ended up falling asleep on my again at around 4:30 for a half hour, and all plans of making dinner at home went out the window. So instead we hit up Panera.

Classic cafe with chicken and a bunch of random add ons for me. I missed the bread and left kind of hungry. Wahh. (so Alex is hubs of the year and running out to get Ben and Jerry’s as we speak:) LOVE YOU.)

That’s all I have for you guys today. I know, such an exciting weekend 😉 I hope you all had a wonderful New Year’s weekend! Let me know if you had any fun on NYE, any good, quick places for gluten free meals, or your tips for calming crazy dogs during fireworks/gun shots/thunderstorms. Please.