This weekend was: being released from the hospital, getting used to being a family of four, a pediatrician appointment, and our first full day home. While that all sounds exciting, it was mostly spit up, diapers, and cabin fever so rather than my typical Best of the Weekend post, I figured I’d share Owen’s birth story. If you’ve never read it and dig birth stories, check out Ryan’s here!

I want to start this by noting: I don’t hold back on details in my life. I’m going to tell you it all in this little story of mine. If you’re doing hypno babies or something similar, skip this and read it after baby (I think it’s a pretty good one, ha!). If hospitals, talking about pain, birth, general grossness skeeve you, skip this post – I’ll be back tomorrow. But if you’re a birth story junkie like myself, keep on reading!!  As always, I’m linking up with Katie and Erin! 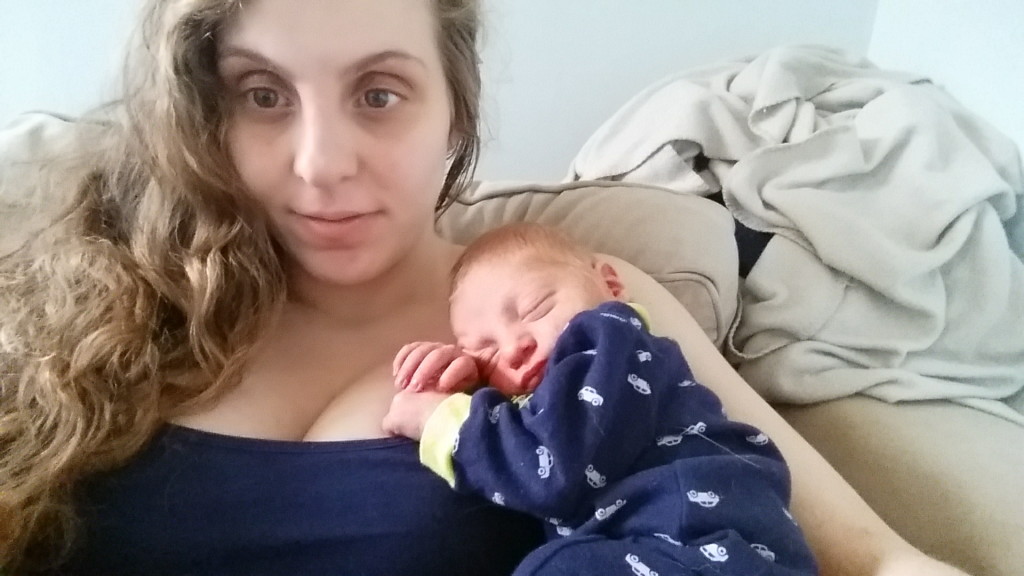 I 200% thought this story would go one of 2 ways: 1. I have a car baby/parking garage baby/a baby in a weird place, OR 2. I have a very boring textbook birth that even I fall asleep reading. Neither happened.

Let’s start waaaayy back to the day before Owen was born. I thought something was happening and that a baby was probably in the cards soon. Sunday night I was having contractions, but nothing consistent or really painful. I had the same kind of thing with Ryan for a week or two before he came, so I knew nothing was set in stone. BUT I also knew that the day I went into labor with Ryan, nothing was consistent or hurt too bad until my water broke.

Either way, I woke up a bunch that night with contractions. Nothing too painful, since I was able to go RIGHT back to sleep. I couldn’t decide if I was waking up on my own, moving and then having a contraction from the movement, or if the beginning of the contraction was waking me up, and moving just helped it to peak a bit. But when Ryan woke me up at 9ish, I noticed consistent contractions ever 10-13 minutes and they hurt when they peaked. When Alex woke up, I told him today may be the day.

And then they got a little more jumbled – 5-14 minutes apart and varying in strength. Alex was to leave for work at 2, and I hate the idea of going to the hospital and being sent home so much that we agreed to wait until 1 to see if he should call out. Around when he would have needed to call out, I had 3 or 4 contractions 6 minutes apart so he made the call.

And then they went back to 8 minutes apart.

So I start stressing because Alex called out and I would hate for him to call out for literally no reason. We put Ryan down for a nap and decided to make the ‘final’ decision of going to the OB or hospital once he woke up. At about 3, though, I had a few close, strong ones and decided to just go to the OB. After Ryan woke up, we packed everything up and headed in that direction. I called on the way since the office that was open was an hour plus away, but in the same direction as the hospital. Thankfully they were in the same direction so it worked out well.

We get there and go to check in (I forgot my wallet in the car.. oops) and the nurse checking me in says, “Oh, you don’t look bad and you’re only 37 weeks so we’re ruling out labor and will bring you into observation to monitor you.” Thankfully, my MIL was on her way home from work anyway so she could meet us there to watch Ryan, who wasn’t allowed into the room. They bring me to observation (I should note here apparently it was a VERY busy day for births – the entire ward was packed.) where I’m hooked up to the monitor. Eventually, the nurse checks me and a sense of Deja Vu overcomes me – the same confused/shocked look the nurse gave me when checking for Ryan. This time I was only 4-5 cm but apparently I wasn’t showing it in any visible way. The nurse tells me that I’ll be admitted to delivery! 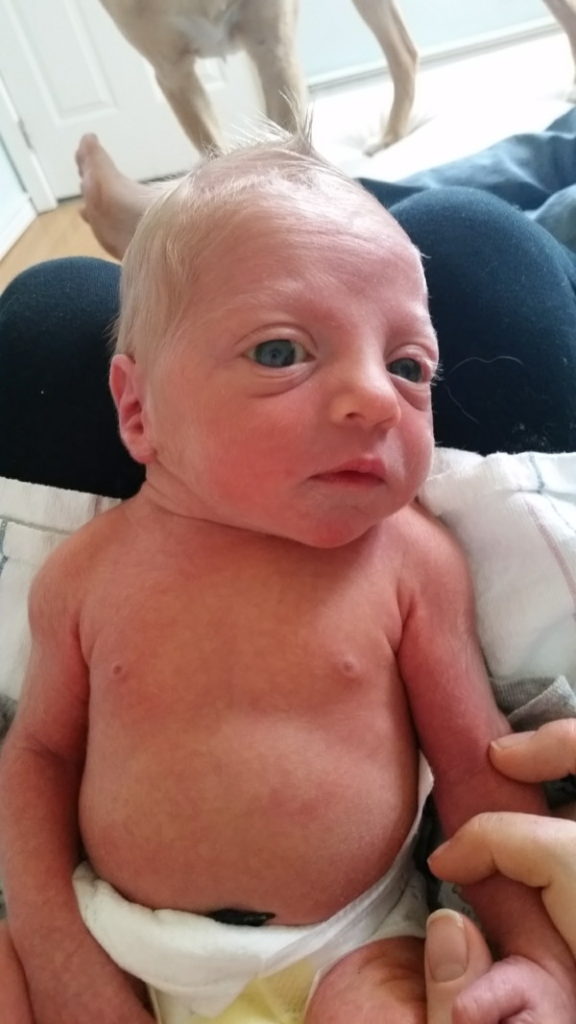 After an iv, a declined epidural (since I was feeling good when not contracting, which at that point was every 3-5 minutes) and a wheelchair ride across the floor, we were in the delivery room and ish was getting real. I was starting to hurt. My doctor was running around and I still hadn’t seen her, but that was fine. Not fine was maybe 20 minutes later (don’t trust my times, I had no clock and it’s all a blur!!) when I tell Alex that during the last contraction I felt like I had to go poo –  a sign you should be pushing soon. We tell the nurse who checks me gently and says that she can feel the bulging bag and the head is right there – but DON’T PUSH. Which is all fine, if you aren’t in agony every 2-3 minutes with your entire body screaming PUUUSHHHH. Turns out my doctor was delivering another baby. Awesome. So I had to wait for that baby to be born before it was “my turn”. (There were other doctors there and apparently very close in case my water broke – which they were avoiding because broken water would be the point of no return – but they weren’t my doctors or approved by my insurance.) At some point I was made to lay on my side with an oxygen mask, since the dude wasn’t getting enough during contractions. 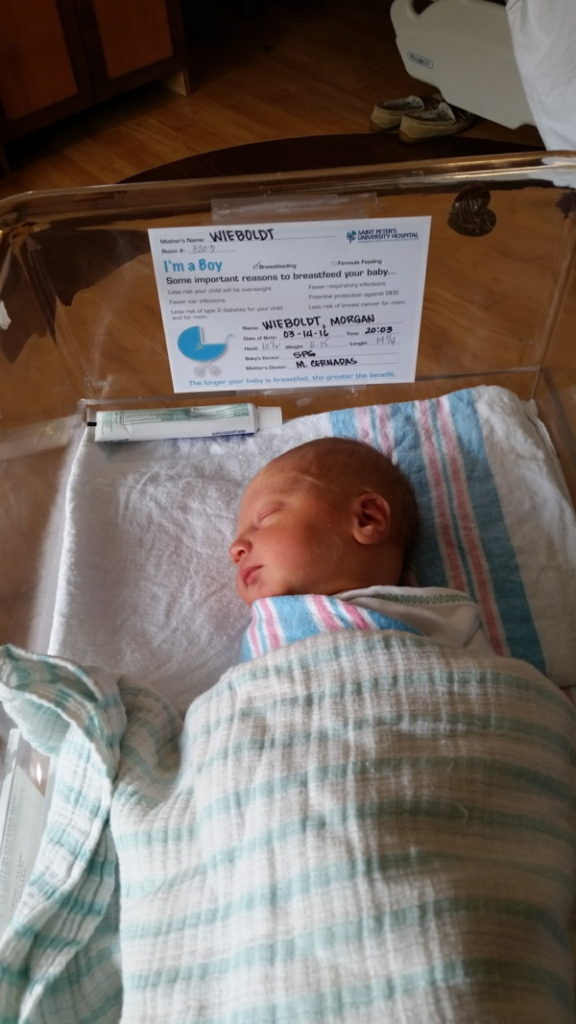 You guys, not pushing when every fiber of your being is screaming to push is probably the most agonizing experience of my life. I was on my side, crying hysterically with each contraction, breathing so I wouldn’t push. According to Alex this went on for 20+ minutes, but I just know that it felt like an eternity. When the doctor finally came in and said it was okay to push during a contraction, I was so relieved. I actually said at some point, oh that feels so much better. I pushed during that contraction, broke my water, and the head was right there. My doctor (who magically also delivered Ryan, which is mostly crazy because it’s a practice with about 20 OB’s. What are the chances she’d be on call both times!) was amazing and coached me through not pushing (since the contraction had ended, but the head was in limbo..) and managed to help me through to the next contraction where out he came AND without any tears. Considering how badly I tore with Ryan, this has been the most amazing thing ever. So basically 1.5 contractions and out he was – a little BLONDIE. the best. We named him Owen Robert, which we decided that day while I was in observation. Owen had no meaning other than being on our short list of names, and Robert is my dad’s middle name.

We snuggled and the nurse cleaned off the goo while I held him and just marveled at him. 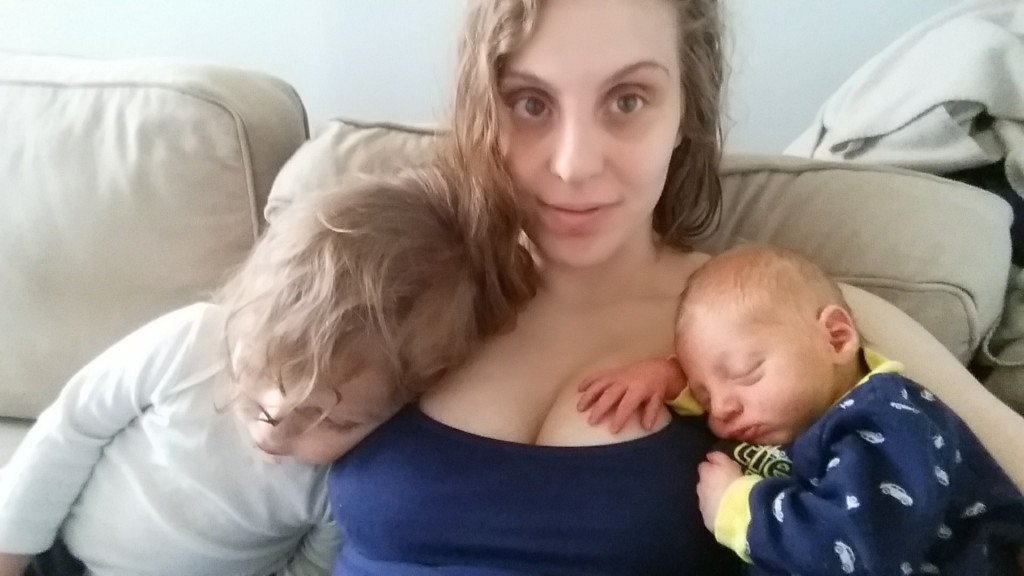 Now (a week later!!) we’re all home and happy and adjusting well!!

Mommas – any tips for dealing with 2 kiddos? Any interesting birth stories? Non-mommas – did this post terrify you? (I really hope not!!) Leave it in the comments!