As a new mom, you want your baby close to keep an eye on them. Creating a nursery in your bedroom is a lot easier than you might think! Having a bedroom nursery is the best way to simplify life with a tiny baby.

When I was pregnant with Ryan, we were casually house hunting and living at my MIL’s house to build up our down payment. We weren’t sure how long we would be there after Ryan was born, but we did know that there was no real other room for him.

So we set up a little baby zone in our room and it worked really well. After we moved, we had the same set up for some time, even though he had his own room.

When Owen was on his way, I knew I wanted to have him spend his first few months in the same room as me once again.

Not only is it convenient for night feedings but Ryan had JUST started sleeping through the night. I had zero desire to mess with that. Thankfully, since I’d done this once before I knew exactly what was needed to create a nursery in your bedroom.

Creating a Nursery in Your Bedroom

Creating a bedroom nursery is actually super simple. Believe it or now, babies don’t actually need that much stuff! Just a few thoughtful items and some careful organization and you can easily create a small nursery in your bedroom.

Follow these steps and tips to learn how to create your own.

By this, I mean

Things to consider when choosing the spot for your bedroom nursery:

All of these are important to consider before baby is all nice and settled and you’re completely exhausted.

You can find my Minimalist Baby Registry here!

What should baby sleep in in a bedroom nursery?

As for what to have the baby sleep in, I personally recommend some sort of play yard with a changing table and a bassinet.

It’s the ideal space saver, and it can be used later as a play yard or a crib for overnights at the grandparents. But my favorite is that it can be used as storage.

While you’ll eventually need or want real furniture like a changing station and a crib, they’re bulky and can be expensive. If you’ll be sharing a small space with your baby, go for the play yard. You’ll thank me.

As an Amazon Associate, I earn from qualifying purchases.

Playyard combination I recommend for a Bedroom Nursery: 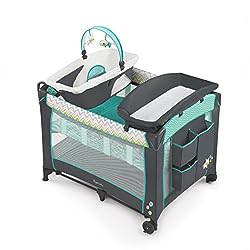 We had this exact play yard with Ryan and used it again with Owen and had no problems with it with near-constant use over 4ish years. I cannot recommend it enough, plus the price is super affordable for all it does.

Set up a station for nighttime feedings.

With a small house, we never had the luxury of a dedicated chair for nursing at nights. In both cases I found myself sitting on the side of our bed nursing and then popping the nugget back into his bassinet when we were done.

This is why having the pack and play is such a huge help – the bassinet and changing table are right next to each other. You’ll inevitably be needing to change a diaper (or three!) before, during, or after a night feeding.

With this in mind, it’s really important to create a bit of a stocked nursing station for yourself. I always keep the compartment in the pack and play stocked with baby and breastfeeding essentials.

What to stock for your night feeding essentials:

In mine, I kept the following items:

These are just the basics, and will definitely change as baby grows and you become more comfortable, but these were always helpful to have on hand for me. It also was much better than trying to find it in the dark.

In addition to having things on hand for baby, make a station for MOM! I used my night stand and kept a few things to make night (or day!) feedings a bit easier.

What to stock in your bedroom nursery for mom:

When Ryan was born, we hadn’t bought a Diaper Genie and were using a plain lidded trash can. My mom randomly brought one over during the early weeks and it was a total game-changer.

No more taking out the trash multiple times a day. No more dog getting into the used diapers. And, most importantly, no more stank.

In fact, we used that SAME Diaper Genie for nearly 5 years until both boys were out of diapers. It’s such a great tool to have in a bedroom nursery so you can easily toss midnight diapers into the Diaper Genie without having to worry.

Read more: Do you need a Diaper Genie?

Organizing the stuff in your bedroom nursery.

I highly suggest using the interior of the play yard to store your baby essentials if you use the bassinet feature. That way you’re not running around looking for clothes in the middle of the night when your baby pees on yet another outfit.

I used a medium sized gift bag for dirty laundry. It’s easy to just toss the laundry into the play yard, so having a spot to throw it quickly helps a lot, especially come laundry time. A neat stack of swaddles is vital as well.

Next, grab a box or basket and place your neatly folded clothes into it – separate onesies/sleepers/pants to make life easier for you.

While it’s probably not super reasonable to deck out your nursery in your bedroom, little touches go a long way! As the last step in creating a nursery in your bedroom, I “hung” these DIY Nursery prints. I just taped them up so that I can move them once the baby is moved over to the big boy room. Plus there is no risk of frames falling on your newborn baby!

Mommas – did you create a nursery in your bedroom? Have you ever tried a Diaper Genie? What were your #nurserymusts? Do you love Target as much as I do? Leave it in the comments!

If you enjoyed this post, you may also enjoy these!

How to Change a Boy Baby Diaper

How to Change a Girl Baby Diaper

How to Avoid Your Baby Boy Peeing on You

How I’m Preparing for Baby Number 2.

How to push during labor