A good night’s sleep is the Holy Grail for parents. Learn how to get your kid’s sleep back on track after a few rough nights!

The first few weeks after Owen was born, everyone’s sleep suffered. While I had totally expected to be living on the no sleep train for a while, I hadn’t really taken into account how having a baby could mess up his sleep as well. Since Owen was born at night and then had a bit of an extended hospital stay due to jaundice, there were quite a few nights out way past his bedtime due to coming to visit me, and all of his naps were taken in the car for over a week.

Once we all were home and things started to settle down, Ryan’s sleep schedule was still way off. He wouldn’t wake up until after 9, and then whine in his crib when I put him down for a nap, not falling asleep until sometime over an hour later. This, of course, meant a later wake-up time and an even later bedtime, which made everything repeat itself. While normally, a late wake-up is a welcome thing, the crazy sleep schedule made for a very cranky boy, which to me was so not even worth it. So I knew we had to do something and to do it fast. 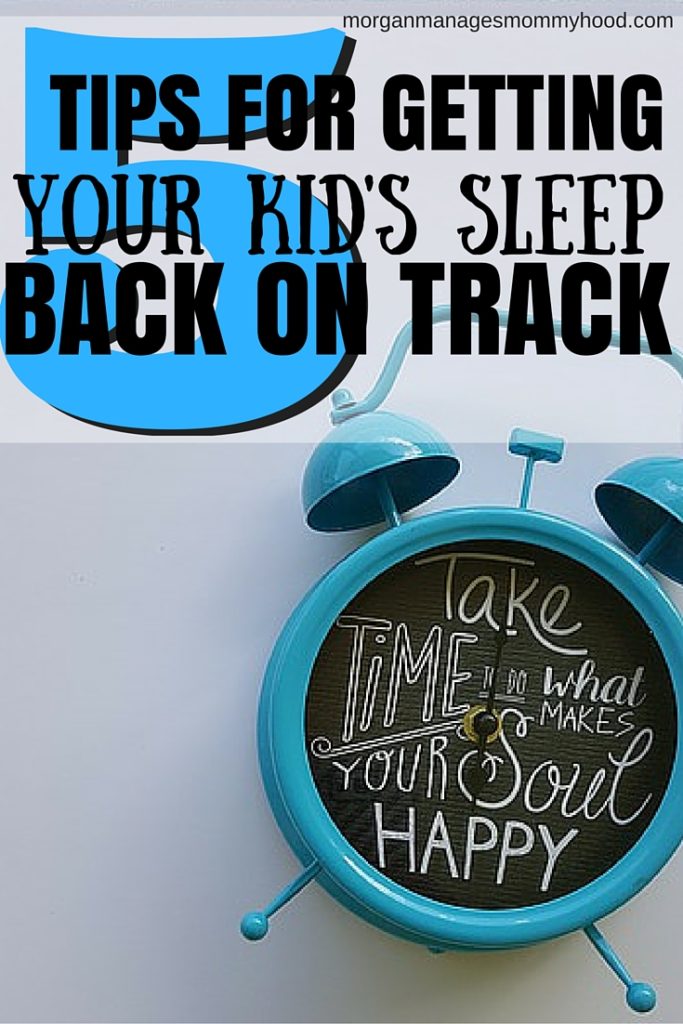 Instead of going into a straight panic, I took a few steps to get my kid’s sleep back on track. I’ve had to use these steps a few times now (hey, life gets crazy with 2!) and each time they have worked like a charm in just a day or two. I hope that they work just as well for you and your family

How to Get Your Kid’s Sleep Back on Track

1. Skip a nap. This may seem counterintuitive, but if you keep one tip from this, I hope it’s this one! If one of your sleep issues is a delayed nap/wake up, try skipping a nap. While the last few hours of the day may be super frustrating and tough for you both, he will be tired by the time bedtime rolls around, meaning he’ll fall asleep easily. At that point, he’ll get his normal amount of sleep and hopefully wake up at his normal awake time! (This is the number one fix for Ryan – since he only takes one nap at 2, I just skip it and put him to bed at his normal time of 7:30 – or earlier if he seems extra cranky.)

2. Enforce wake ups. Another issue that causes messed up sleep schedules is sleeping too late – either in the morning or after naps. Choose a time that is the absolute latest your kiddo can sleep to ensure that he will get tired by enough to sleep easy at nap or bedtime and stick to it. Yes, the old saying is to never wake a sleeping baby, but sometimes it’s necessary for everyone’s sanity (our late times at 8AM and 4:30 PM for naps) in order to get your kid’s sleep back on track.

3. Stick to a schedule. Predictability is a toddler’s best friend, so if they know that there is a finite order of dinner, play, bath, jammies, book, bed, they will be more likely to start settling down on their own instead of running around like a psychopath. Even if you’re not a “schedule” family (we really aren’t, and when Ryan was under 18 months there was definitely not even a semblance of one in our house) try to make some vaguely set times for naps and bedtime that you as the parent are aware of.

4. Bedtime is bedtime. This is a big one for us since Ryan is not the kind of kid that will just get tired. I hear of these unicorn children who get tired and lay on the couch and fall asleep, but that is just not Ryan. He will go and go and go non-stop until we force him to go to bed. So for us, he HAS to be in his crib at 7:30, 8 at the very latest. Even if he doesn’t fall right asleep and just chats with himself, he needs to be IN his bed, bored and ready for sleep.

5. Be flexible. With all of this in mind, I think it’s important to remember to be flexible. There will be times and days when staying up a little later is fine – for us, on Saturdays when Alex goes into work before Ryan wakes up and comes home later, I let the boys stay up a little later to hang out. Or if we’re out with friends or family and he’s having a great time, I’m more flexible with a nap or sleep. There will always be time for sleep schedules and well-rested nights, but there won’t always be times for them to be fun and little.

So tell me – do your kids have a sleep schedule? Do they ever need help getting back on track? What are your favorite tips for getting your kids sleep back on track? Let me know in the comments!

If you enjoyed this post, you may also enjoy these!

How to Stay Awake When You’re Really, Really Tired

Tip and Methods for Getting to Sleep