Last time I had chicken noodle soup on WIAW a few of you asked for the recipe, so yesterday when I made a batch I figured I’d document it a little better. 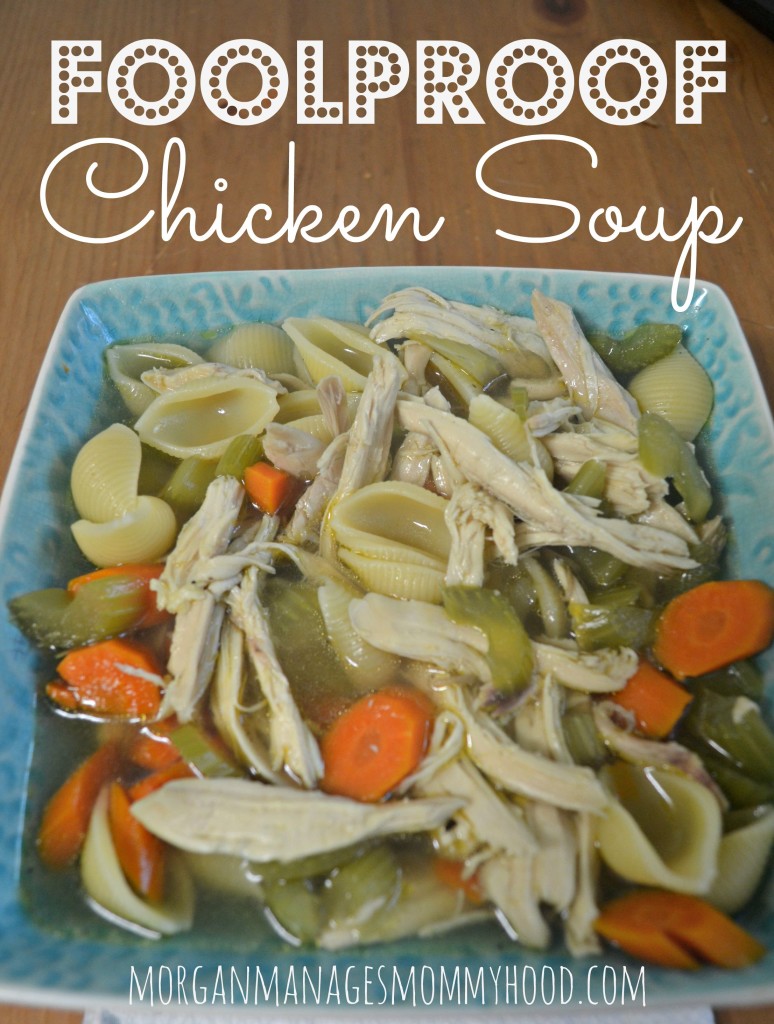 Chicken noodle soup is seriously one of my favorite things ever. When I was little, every time I was sick my mom would spend hours making me a huge batch to eat until I was better. It was probably one of the first “adult” meals I made with a legit recipe. I tried multiple recipes, choosing bits and pieces I liked best, omitting things I found to be time wasters until I made my own recipe that was perfect for me. It’s still one of the few things I can eat when I don’t feel well. But all winter I find myself making pots of the magical elixir just because it’s easy and warm – and really, what more could you want in a food? Plus, it’s so versatile, freezes great, and it’s cheap to boot.

Anyway, I think I’ve talked enough about my love for Chicken Noodle Soup – let’s get on to how to make some Foolproof Chicken Soup! 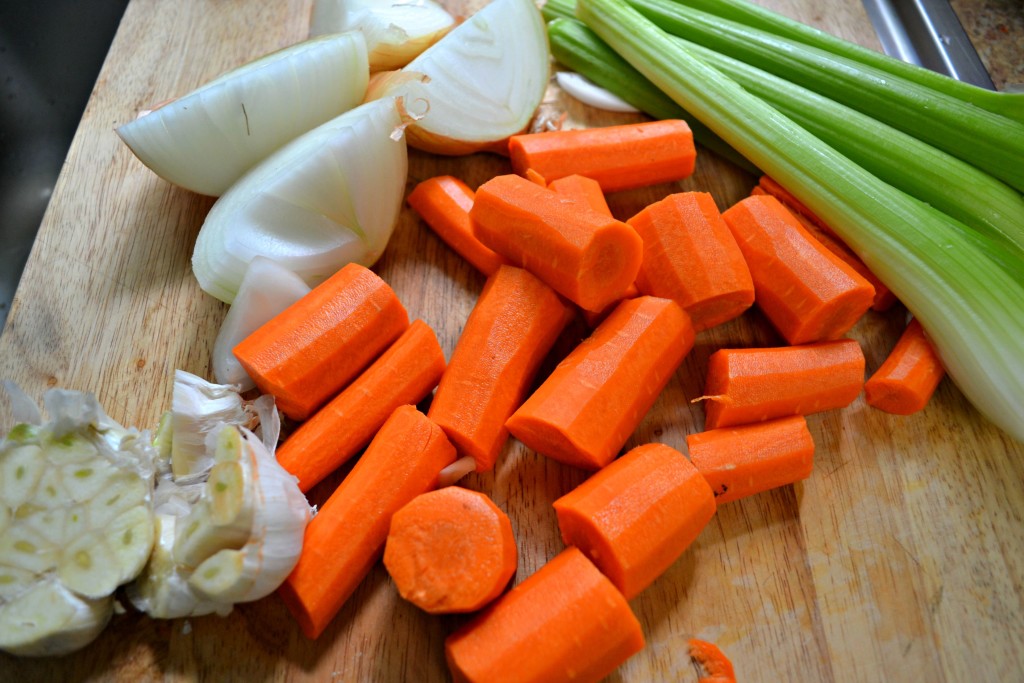 First, get together your aromatics. We’re going to make our own chicken stock. Might sound scary, but it’s crazy easy. If you want to use bought or pre-made stock, you can try this recipe from Pioneer Woman that uses a whole chicken. Since in my mind, that’s how chicken soup should be made. Anyway, take your head of celery (I’m using hearts since I bought it from Sam’s Club.) Take of the biggest outer ribs (maybe 4-6?) and chop the middle into 2-3 inch lengths, leaves included. Next grab maybe 4 carrots. You don’t have to peel these, but I do because I’m weird and I like to eat them after they’ve been cooking in the stock. Cut these up as well. Halve or quarter an onion, depending on the size and halve a head of garlic s that you cut all cloves in half. 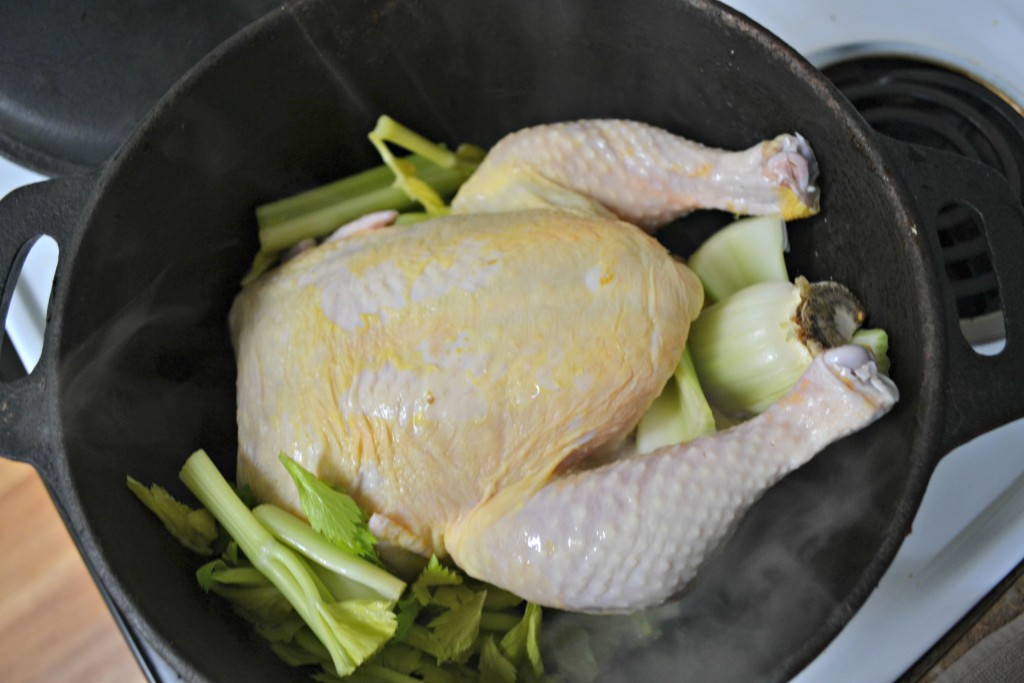 Next, add your chicken to the pot. I use a cast iron dutch oven because it’s what I have, but a stock pot* would be your best option. Add in the chicken first especially if your pot is smaller so that it doesn’t get stuck on top of the veggies. Usually, my chickens are about 5 pounds. This is mostly because I buy my chickens 2 at a time from Sam’s Club and they’re usually 5 pounds, but that size seems to work perfectly for this recipe. 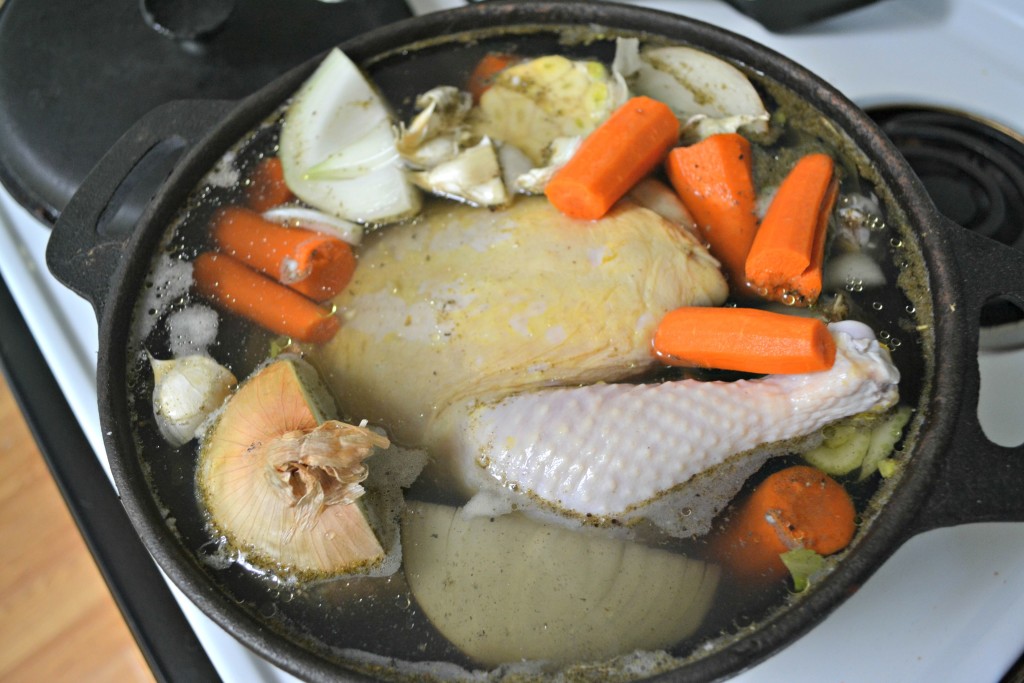 Add in veggies and seasonings. I use about 1/2 teaspoon of poultry seasoning, 1 teaspoon or so of coarsely ground black pepper, and 2 bay leaves. I also add in salt now, but you can add it in later. I used maybe a tablespoon at first and taste it as I go. As you can see, I kind of do seasonings by feel at this point, but these measurements are a good start if you’re not sure what you like in your chicken soup.

Fill with water (about 2 quarts) and set to medium high until a good, strong simmer happens, then reduce to low and let simmer for an hour. I like to skim every so often, but the jury is out on whether it does much. So if you’re busy or lazy or whatever, you can skip it.

After an hour, take out the chicken. This is my favorite tip that I don’t know where I learned. It keeps the chicken moist and not crazy over cooked. Let it cool a little, then cut off the meat and put it aside. Put the bones back in the pot for about an hour*. If the stock looks low, add in a little more water, but remember that too much will water down the taste.  In the mean time, clean, peel and cut up your celery and carrots. I like a lot of vegetables, so I used 6 carrots and 8 celery ribs this time around, but use what sounds good to you! I personally hate soup that’s all broth. Also, shred the chicken. 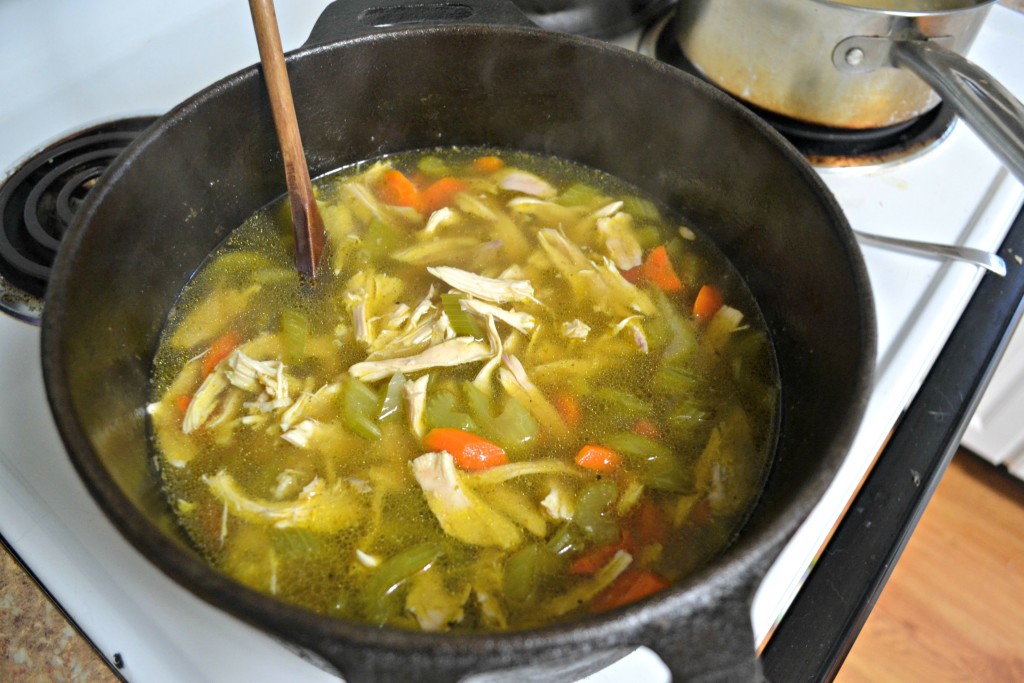 When you’re ready for the broth, strain it. You can use a fine mesh strainer if you have a large one, or a colander lined with cheesecloth/paper towels/a clean, cut old piece f clothing. (I do that a lot because Cooper like to chew the crotch from my yoga pants if I don’t put them in the closet……. Put back into the pot after you quickly rinse it out and bring it to a simmer once more with the chopped vegetables. Let it go about 30 minutes, then add in the chicken. Once the vegetables are soft, enjoy! 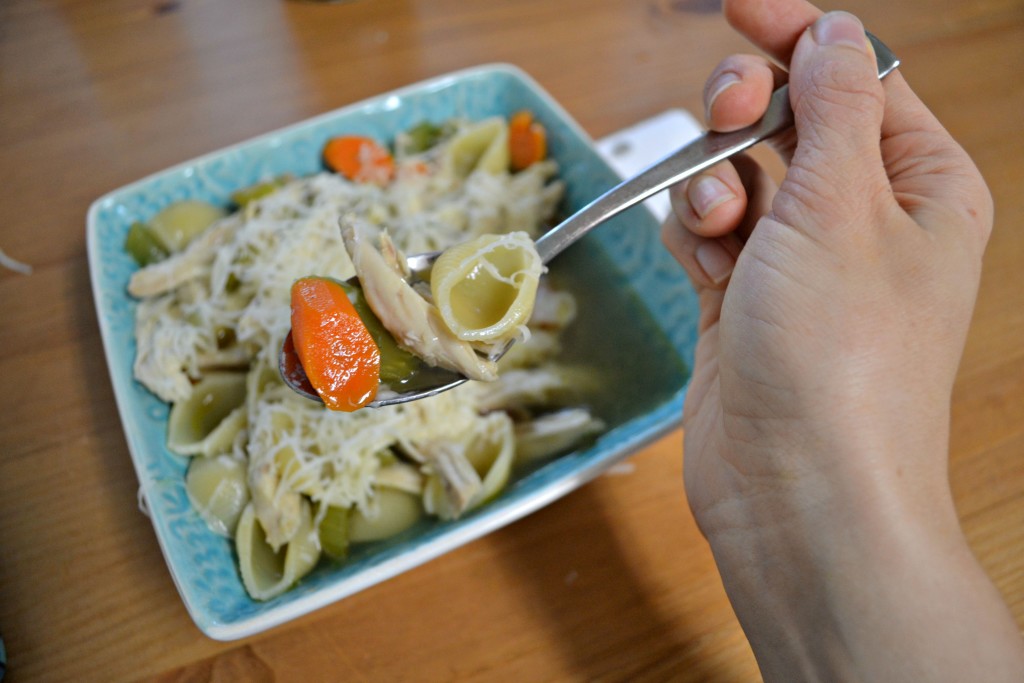 Now, I purposely didn’t title this foolproof chicken noodle soup. I cook my noodles separately and add in before eating. Sometimes I use rice. Sometimes I don’t use anything. Sometimes I heft it up with extra frozen veggies. Corn and spinach are my favorite. You can cook the noodles right in the soup, but if you plan on refrigerating it, I highly suggest not to, since those noodles will keep on absorbing the liquid until you have a stew soup. Delicious, though, if that’s what you want. Also, if you plan on freezing, do yourself a favor and leave the noodles out. Speaking from experience, it’s gross. I freeze this in individual servings, usually in old glass PB jars, and it’s perfect when I’m sick/don’t feel like making dinner/have an empty fridge. 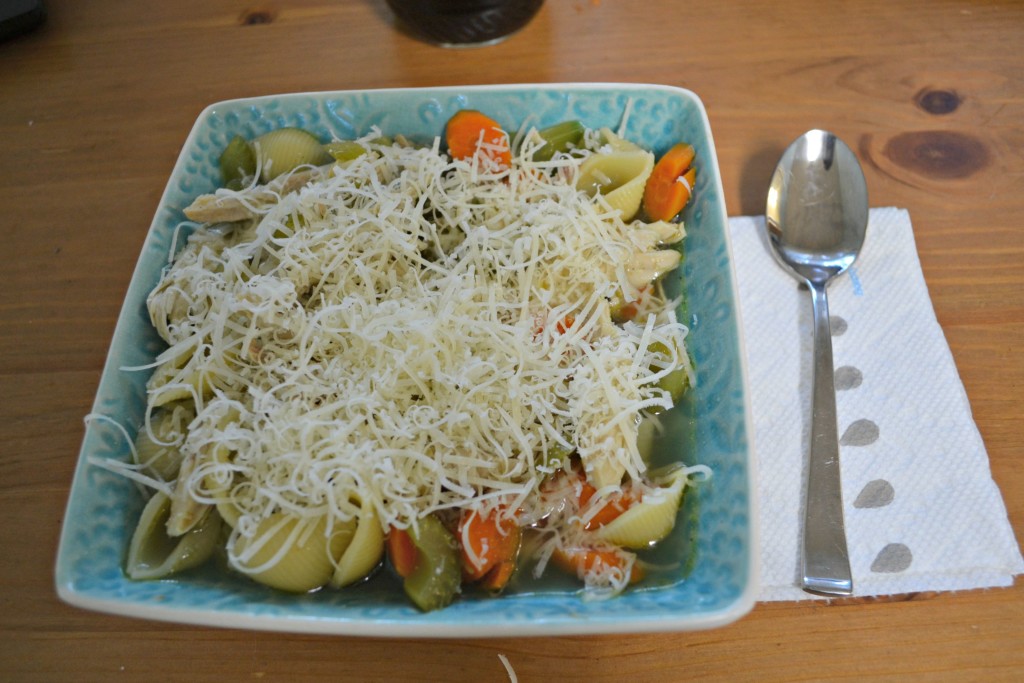 I also like to add shredded parm on mine, which is a random thing my mom used to do when we were kids and I love. Try it.

*I’ve used a small quart saucepan to make a smaller batch.When making the stock, use 1 bone in, skin on breast and a few bone in skin on thighs.

*If you don’t want to use a whole chicken, use skin on, bone in chicken breasts and thighs/drumsticks/wings. Maybe 2 pounds of the leg stuff, and a pack of 2 breasts. I’ve done it this way and it comes out just as well.

*As long as you can, really, but really aim for an hour. If you’re short on time, just do the one hour and skip the bones step, but if you have the time, it really makes the stock have such a deeper flavor. If you’ve got a ton of time, check out bone broth.

*Save everything. I have a bag in my freezer (much like my citrus rind jar) where I toss carrot tops and bottoms (and peels if I’m feeling ambitious) and parts of celery and onions I would normally throw out into the bag so that I can make the legit cheapest stocks later. You can either save a TON of them and make vegetable stock (I would at that point add in everything if that’s your goal – tomatoes, zucchini, fennel, kale middles, potato eyes, mushroom stems – whatever you’re going to throw out.) Here is a great source for vegetable stock with scraps.

Okay, so that was a little lengthy, but chicken soup is quite literally for my soul, I can be wordy, and I like to share my every thought with you guys. Anyway, what’s your favorite soup? The first thing you ever cooked yourself? Let me know in the comments!!