Dinner time can be tough – everyone is tired and ready to relax, but tummies are grumbling. In most houses, dinner time is a rushed moment of the day, struggling to get food on the table before kids get to grumpy. And then you have the arguments.

I want something else.

Can we have mac and cheese instead?

Sound familiar? I’ve been there.

Dinner Time Battles and How to Handle Them

If you’re struggling with meal time battles, read through my favorite tips on dinner time battles and how to handle them – let’s make dinner time less stressful and something you can actually look forward to! 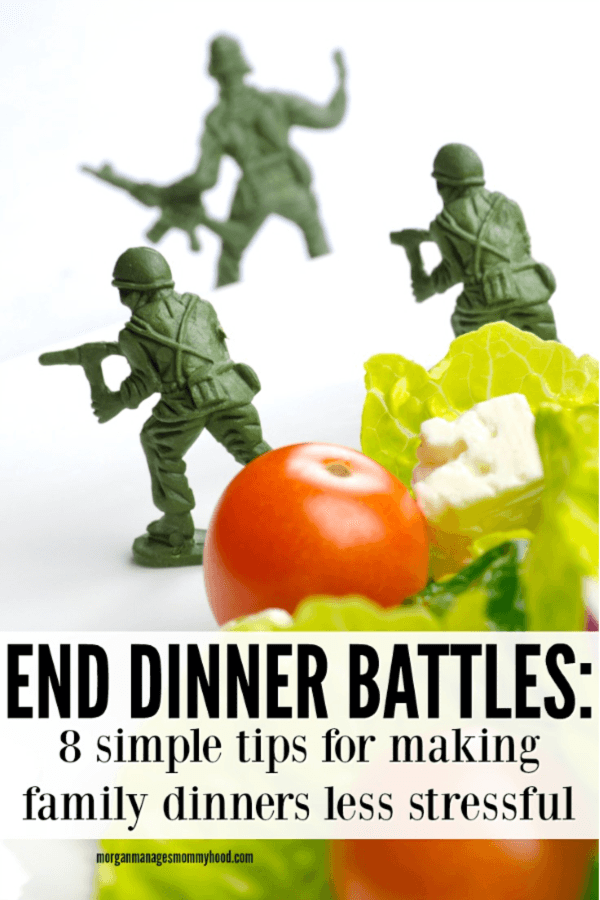 Rules are rules. Make sure if you make a rule for one night that the same rule applies the next night.

Sometimes we bend the rules because we’re exhausted emotionally, physically, and mentally. But by consistently disregarding the rules you create, you’re teaching your kids that they aren’t finite.

Recent research shows that it can take anywhere from 12-30 tried before a child can make a decision on a food.

Yes, you read that right, it can take THIRTY tastes before your kid even know if they like or dislike something.

So if at first taste your kid decides that carrots are the Devil’s food, keep trying. Science shows that even just getting the food into their mouth counts, too.

Taste buds take many ‘tastes’ on separate occasions to grow to understand a food. Continue to give your kids the chances to be exposed to different foods.

Even more, as children grow, so do their taste buds. So something that as horrible to them at age 8 might be delicious at age 10.

As an adult, I cannot even begin to tell you how many things I was sure I did not enjoy only to try them again later in life and realize that I loved them. Sometimes it’s a different preparation, sometimes it’s just age.

Rules are rules. If you’re going to make a rule, it should apply to the whole family.

So if the rule is that you need to try everything that is served to you, you better make sure your picky husband also has a few carrots on your plate.

If you really hate cilantro and refuse to eat it, you can’t tell your kids they need to eat the cilantro rice that came with their meal. By setting good examples for our kids, we are much more likely to guide them in the right direction.

This is especially important for ‘new’ meals. I always give the boys something they like with a meal.

While I try to avoid fruit (simply because given a chance they will inhale fruit until they burst) I do offer one serving of something they like. They cannot have more until they eat some of each of the other foods they were served.

For example, a common, simple meal around here is roast chicken, potatoes, and carrots, which I might serve with strawberries. If Ryan eats all of his strawberries and none of anything else, he cannot have seconds on the strawberries until he eats one bite of each part of his meal.

On the same note, bribery doesn’t work. Yes, it might work in that moment – Ryan might eat a carrot in exchange for a strawberry. But what it’s teaching him is that the carrots are the less desirable of the two, and that the strawberry is a ‘reward’ for doing something he doesn’t like.

This creates habits that are hard to break and makes it increasingly difficult for your kid to eat things they don’t like without incentive. This also goes for things like, “if you eat your dinner we can go get ice cream!”

Save it for later to avoid dinner time battles.

While it’s not ideal, if we make a meal that one of the boys decides he just doesn’t want in that moment, I’ll never force them to eat it.

Instead, I’ll put it off to the side. More often than not, Ryan decides he’s hungry 30 minutes after we clean up dinner. Rather than letting the kid go hungry, he is welcome to sit at the table and eat the meal I originally made for him.

He does NOT get a new meal, but he can have a second pass at the meal we originally offered.

At the end of the day, kids have off days which can feed dinner time battles. They might be tired, feeling off, teething, having a bad day. It’s harder for kids to identify and express these things than it is for us as adults.

If you’ve had a really long day and know your kid might be tired, to be honest, cut them a little slack. I’m not saying let your kids have chocolate chip cookies for dinner because they’re tired, but just remember that sometimes, everyone needs a little grace.


Okay so tell me – do you struggle with your kids at dinner time? What your biggest advice to other moms struggling with grumps at dinner?

4 Tips When Losing Patience as a Mom