HI! I’m ALIVE! I didn’t forget about you all! I’ve miss you!

So. I’m back from vacation. And I unexpected didn’t post for a week. Which is weird for me, since when I had Owen I didn’t even take a day off of my then 7 day a week posting schedule. But I had nothing pre-written and, like I said on Friday, I was figuring that I’d write in the car or the hotel and I’d be good. And then I didn’t. And I have ZERO regrets.

You guys, I so needed that break. I was getting so overwhelmed with everything – this space was starting to feel like a chore rather than something I do in my spare time to make myself happy and remind myself that I am a whole other human besides ‘mom’. And where’s the fun in that, right? To be totally honest, this space was very rarely on my mind while I was away – I was just way too busy. Between lugging around 2 kids and (hint hint) being in the most magical place around, I was wiped each night, going to bed with the kids most nights. And that’s okay! The world kept turning. I’ll probably talk about what THAT all taught me, but for the time being, know that taking a break from something non-essential is totally healthy. 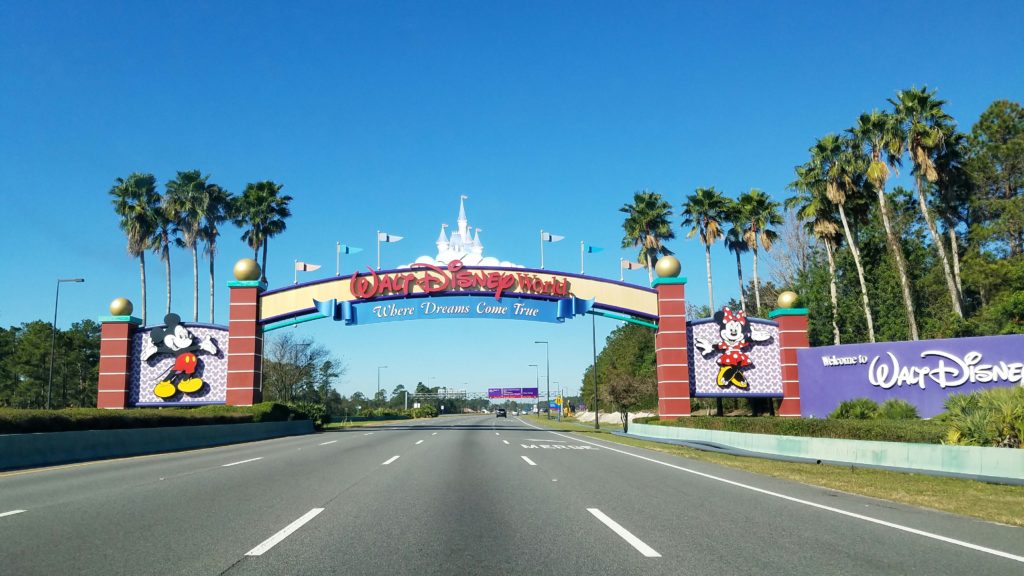 YOU KNOW WHAT’S ALSO HEALTHY? A LAST MINUTE TRIP TO FREAKING DISNEY WORLD. Yup. We went to Disney, guys. The original plan was a Florida trip – Daytona, St. Augustine, Miami, Key West, in some random order. Then Alex asked if I wanted to do a day at Disney – DO I WANT TO DO A DAY AT DISNEY. Obvi. FYI this was weird since Alex said we would never do Disney until the kids were older. So this was a huge surprise. He’s not necessarily the ‘Disney’ type, ya dig? 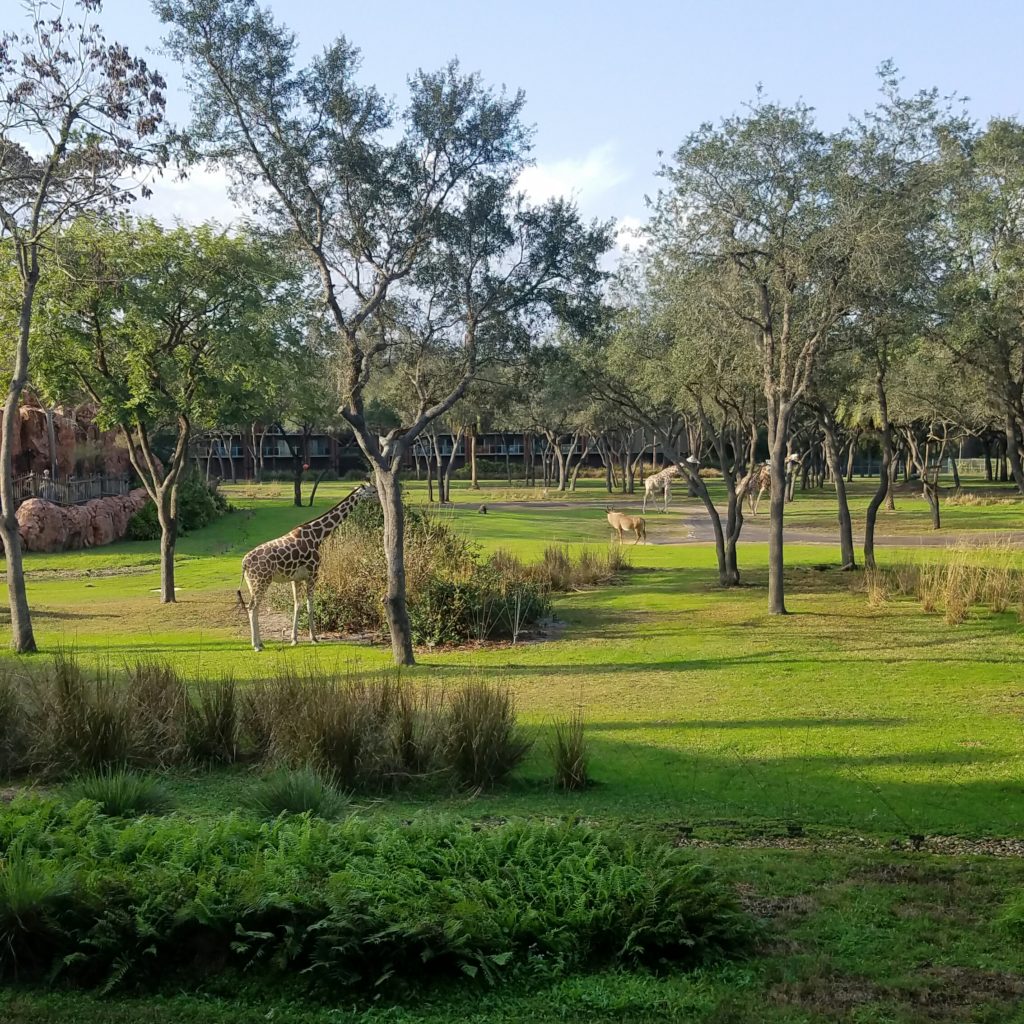 But he’s a trooper and even booked my DREAM hotel that I’ve literally been talking about for years – Animal Kingdom Lodge. If you don’t have kids and/or the mindset of an 8 year old girl, Animal Kingdom Lodge is a Disney resort that has a ton of animals – giraffes (my all time fave) zebras, okapi, gazelles, antelopes, flamingos and a ton of others – living and roaming on the property. Like right outside your window. Waking up to a giraffe is kind of my dream life.

Side note: My sophomore year of college I was accepted to the Disney College Program, which is basically study abroad/a work study program in DISNEY WORLD. Coolest ever, right? I was so pumped to go – I got accepted in March (I think?) and was to go in August for the fall semester of my junior year. And then on Memorial Day I met Alex. I made a ton of excuses, not wanting to admit it, but the truth is, I didn’t go because of him. THANKFULLY it was the right decision – I’m not sure what would have happened if I did go, and obviously a husband and 2 kids is totally worth it. THAT BEING SAID – I kind of feel like I have a lifetime of Disney to make up for.

Okay, sorry, this is seriously getting so off topic and wordy but I get kind of excited about Disney. Long story short, Alex was so impressed with the Disney hotels that he agreed that we should just make it a Disney week. Did I marry a good one or what? He also agreed that we should come once a year.  A GOOD ONE I TELL YOU. Turns out, it was a freakishly busy time for the lodge, though, so we transferred to the Wilderness Lodge instead. Still super cool, but no animals. It did have the cutest mini waterpark/splash pad for toddlers though, which just about made Ryan’s life.

OKAY SO LET’S TALK GOOD STUFF. I’m just going to share some highlights because at the very least you have a long post coming on how to handle littles at Disney without losing your damn mind. Let’s GO! 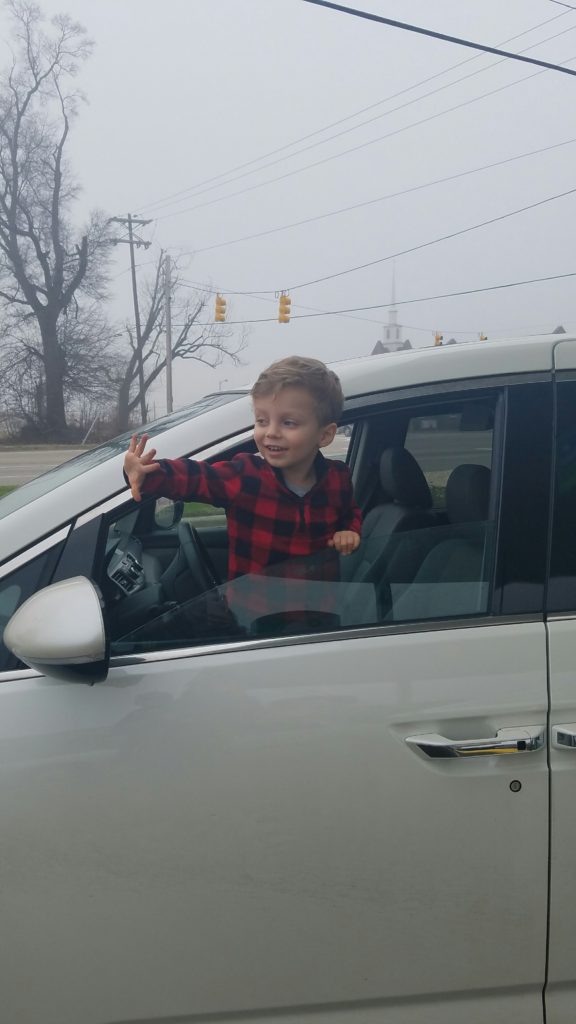 We left home before 7 on Saturday morning and stopped around 6 in Charleston for dinner and bed. This was kind of a show because dinner was not great and the hotel we stayed in said they had no cribs? Whatever, we had one of O but none for Ryan who got to sleep with us. 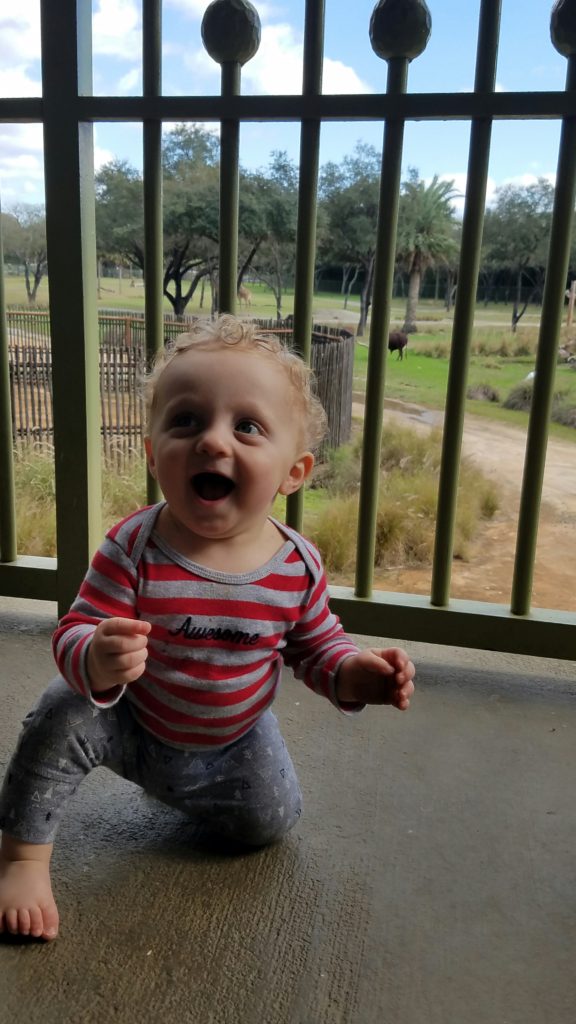 The next day we got to Disney around 2? 3? I don’t know. But we were all really happy about it. This is our little balcony at Animal Kingdom Lodge – I want one. 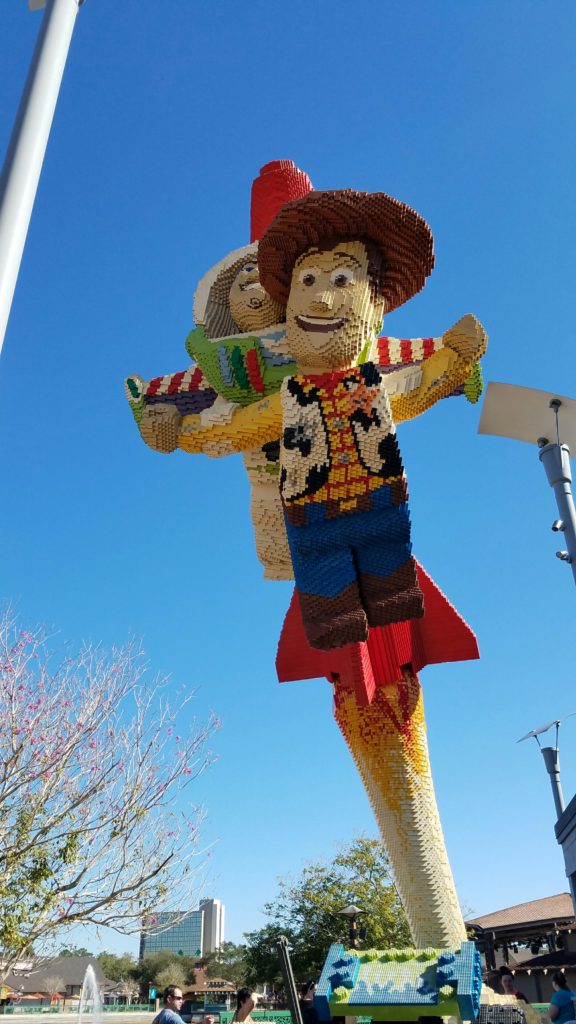 We headed down to Disney Springs for the night to enjoy weather that didn’t require layers (though it was kind of cool and on and off riany for the first 1.5 days we were there.) How crazy is this Lego thing? 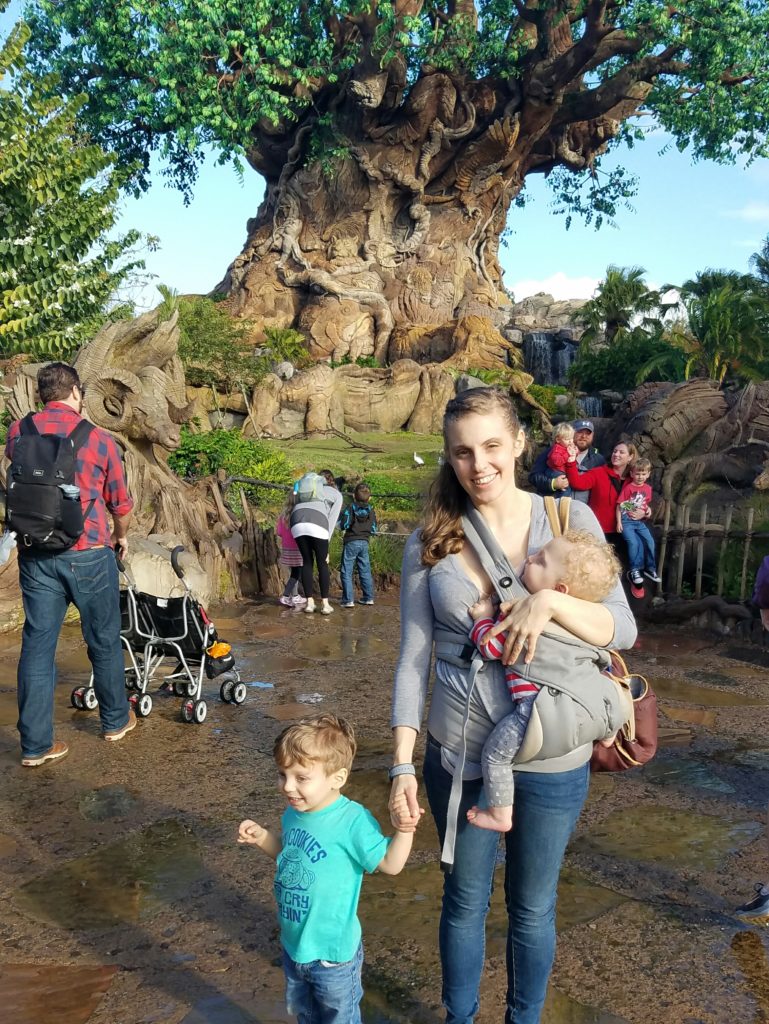 Day one: Animal Kingdom. PS photos with kids are hard. 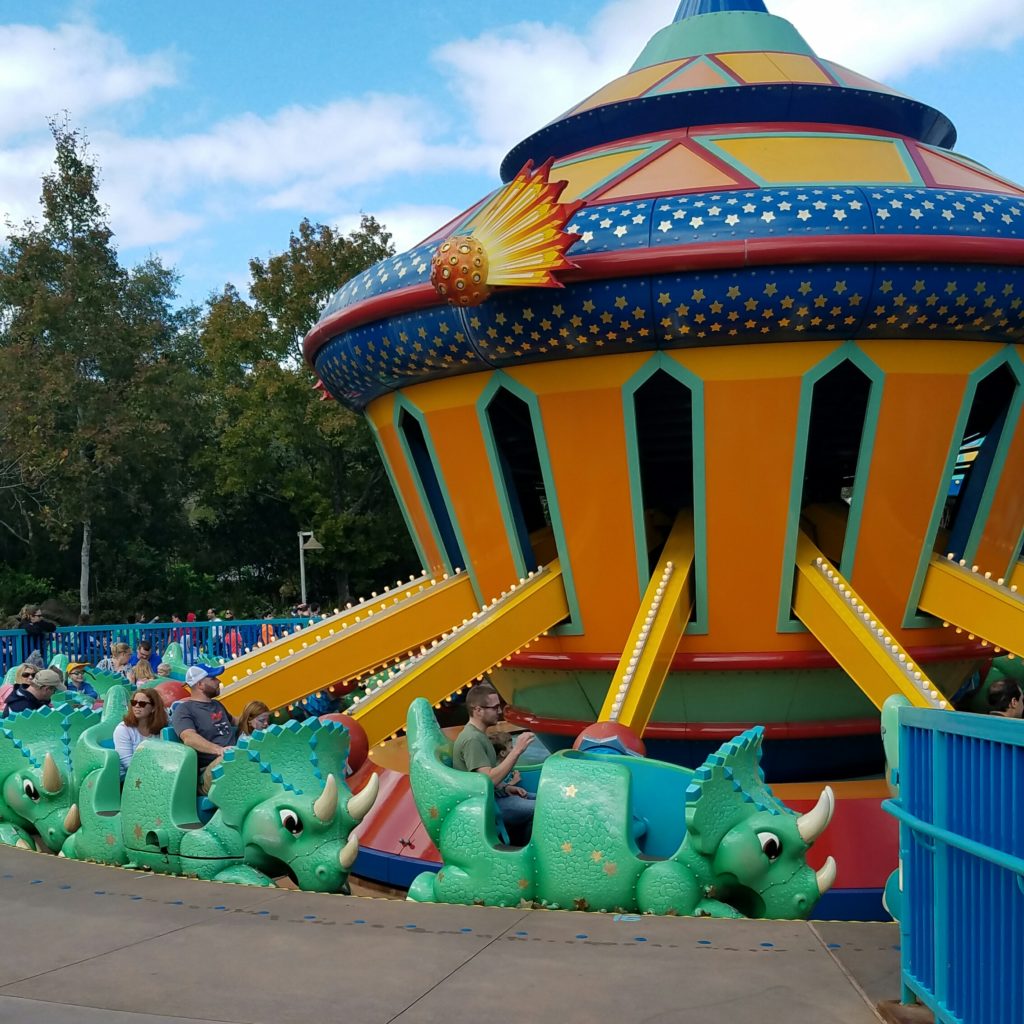 Ryan’s first ride – he liked it, absolutely hated it, wanted to go on again in that order. Toddlers, yo. 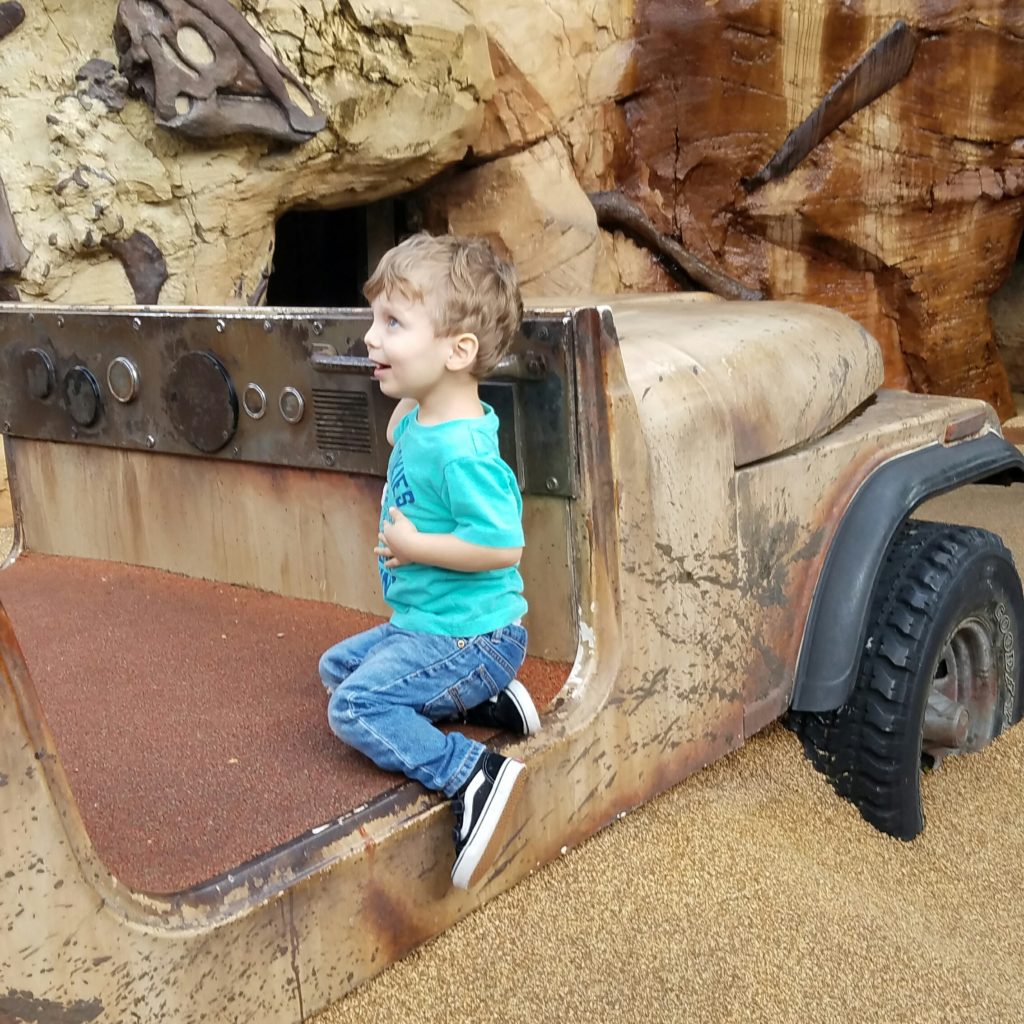 The tantrum that ensued after taking him from this was a rough one. 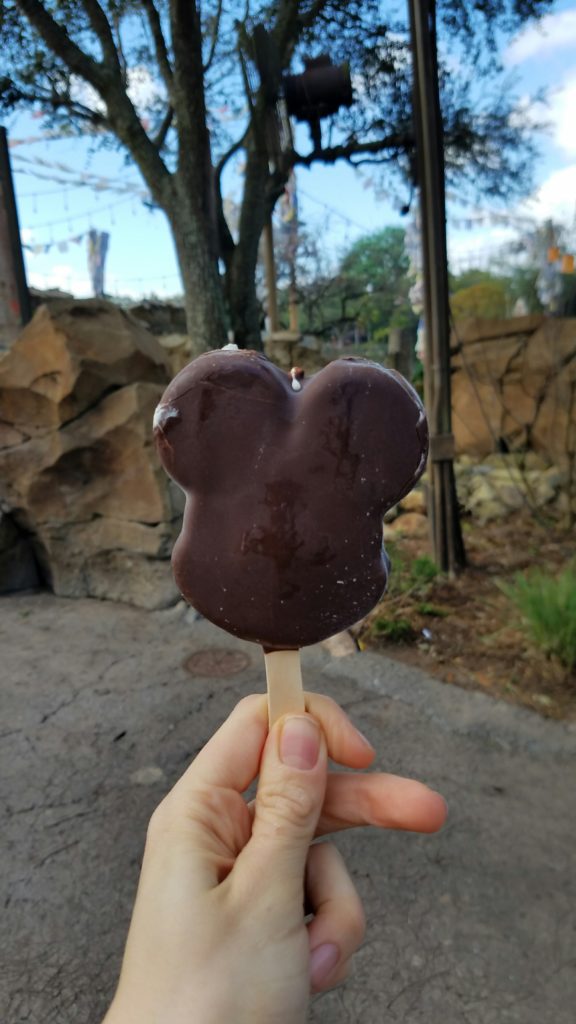 It was cool, though, because MICKEY BARS. I went to Disney when I was 7 and remember exactly 2 foods: Mickey Bars and fish and chips. (my grandparents are from England, and took my dad and uncles when they were really little – my dad said they were my grandpas favorite.) 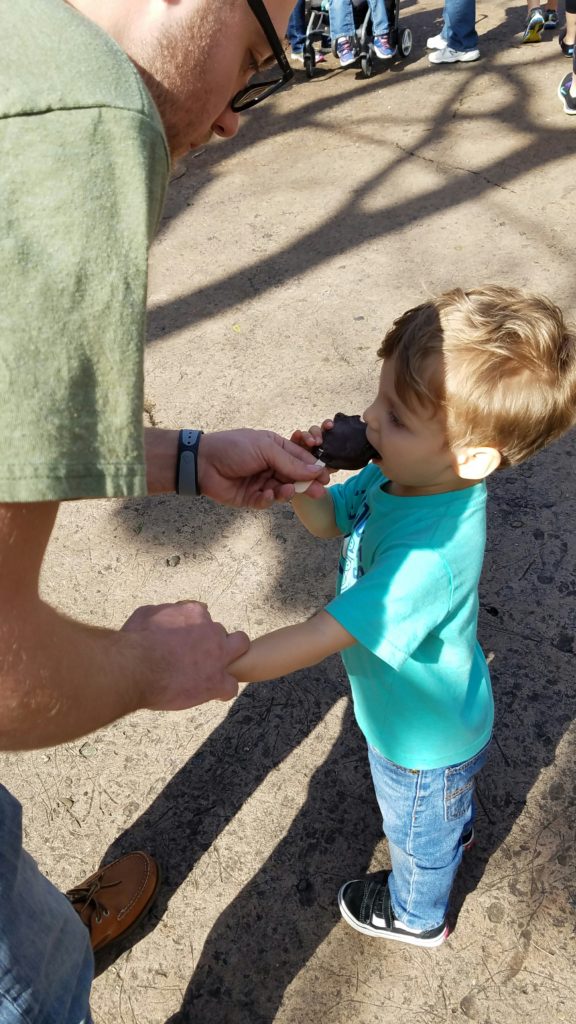 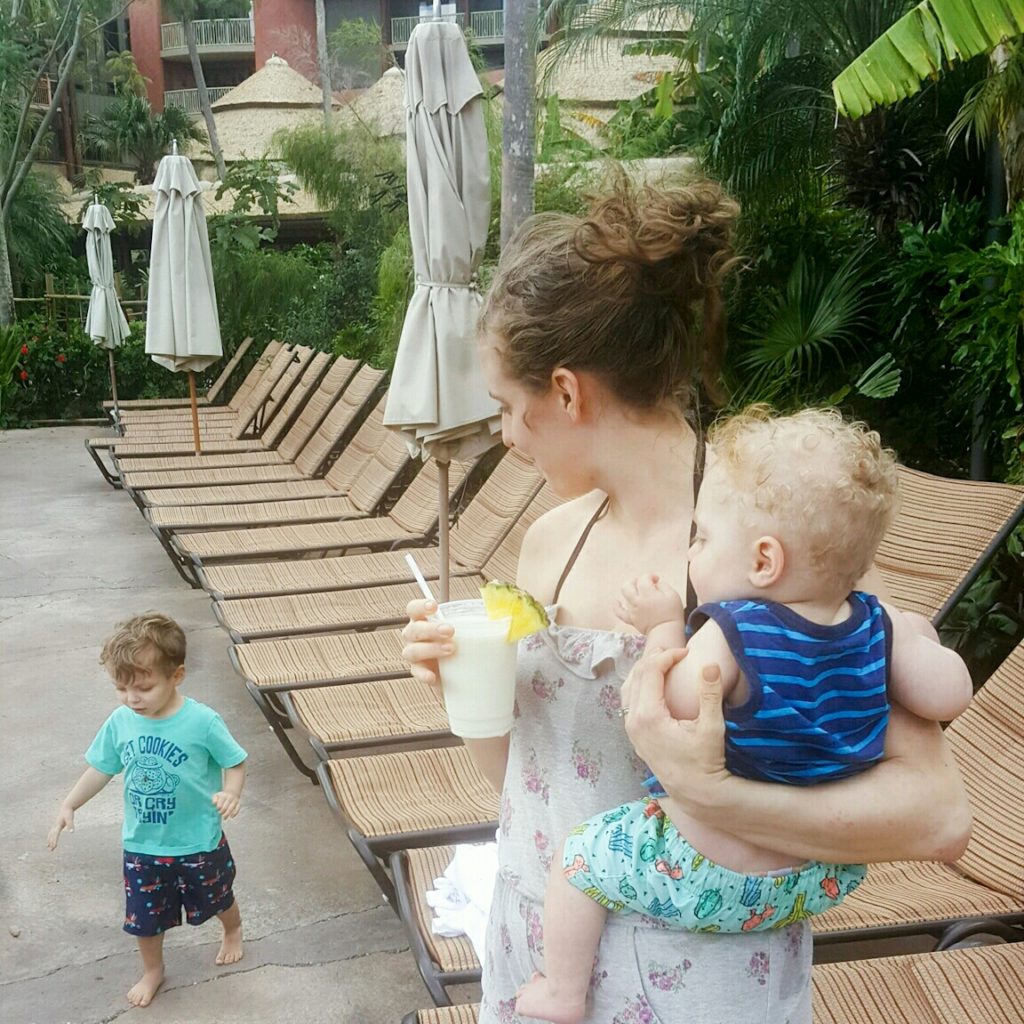 We called it an earlyish day and hit the pool. Plus pinas for momma and daddy because vacay. 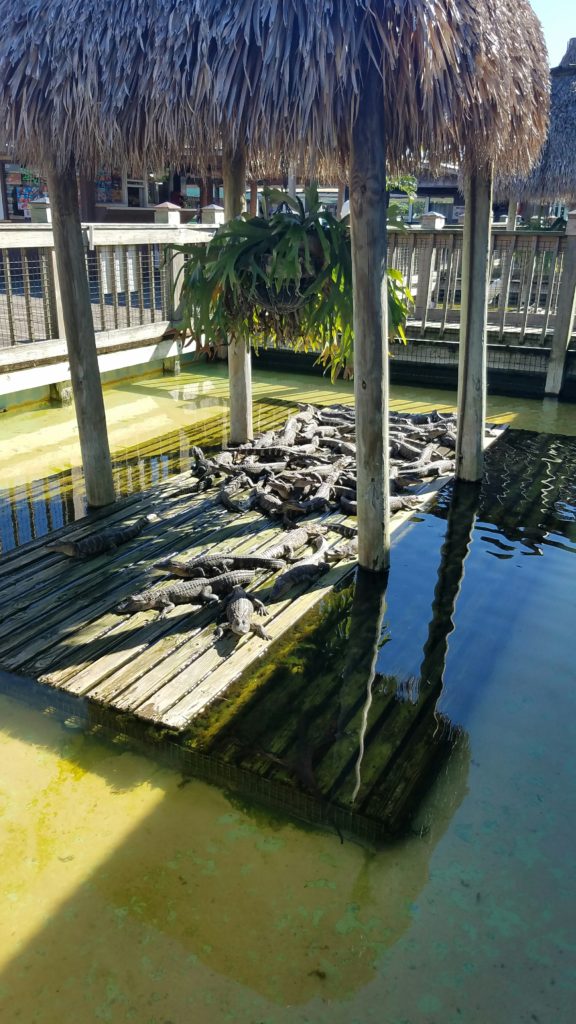 We were very thankful that we decided to extend Disney because if we tried to do another park the following day, it would have bene horirble and full of tantrums. We were all exhausted. So wek kept it low key and wandered around Orlando – the boys took much needed naps – and then went to what might be the weirdest ‘theme park’ I’ve ever been to – Gatorland. Yes, a theme park of alligators. 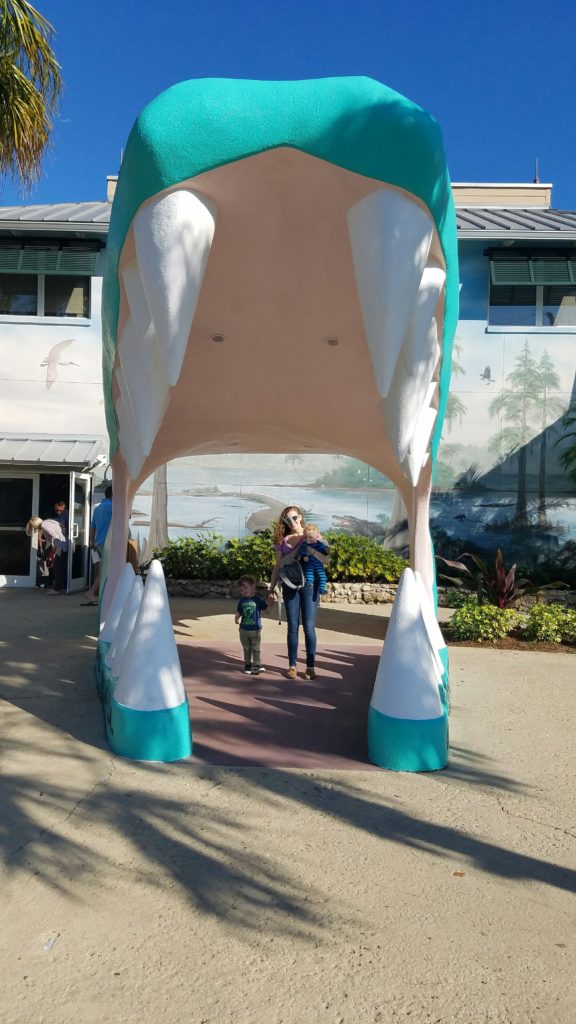 Alex really dug it, but I kept having mini panic attacks because there were these crazy huge birds (like, the size of Ryan and Owen) everywhere and I kept thinking about that poor little boy – Ryan’s age – who was killed by an alligator last year. the photo ops were prime, though. 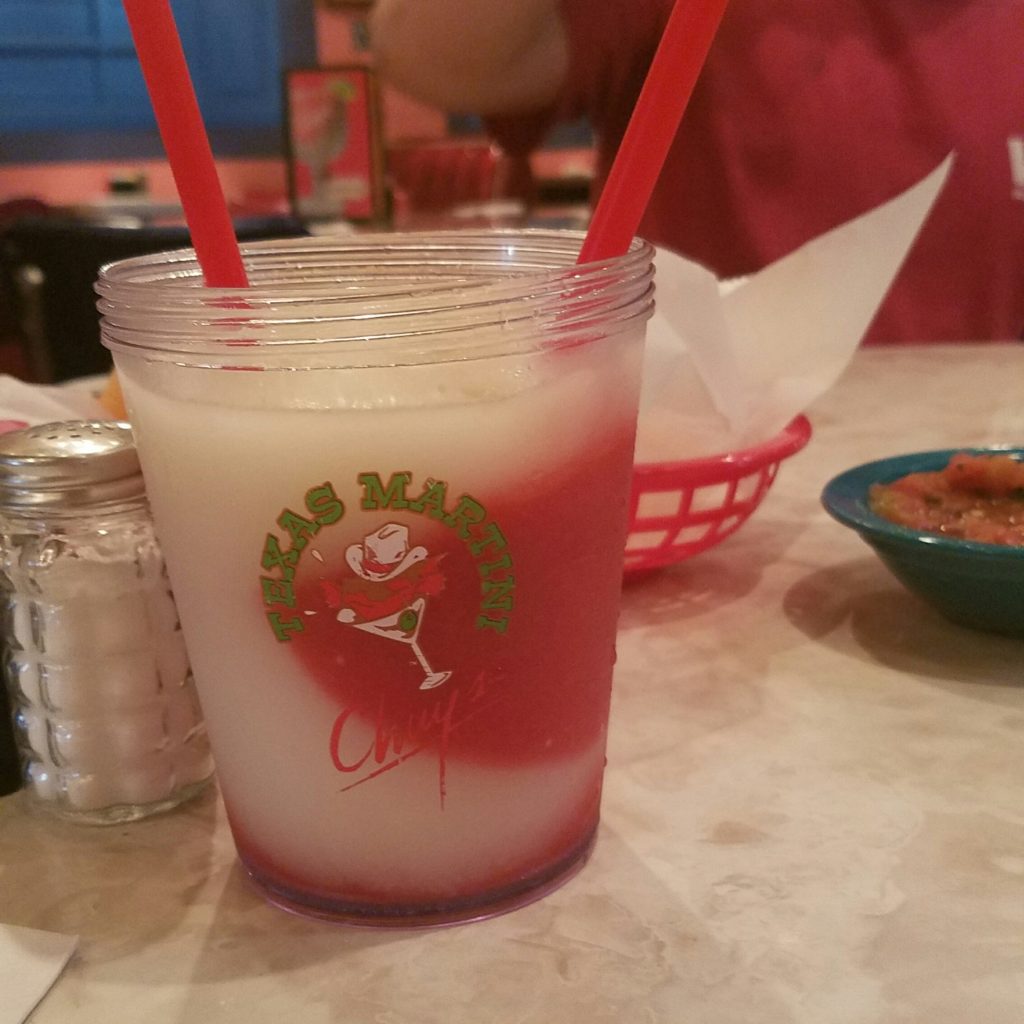 Alex found a Chuy’s, which we love from Austin, and we hit it for dinner. Perfectly timed, we split this for a happy hour special. 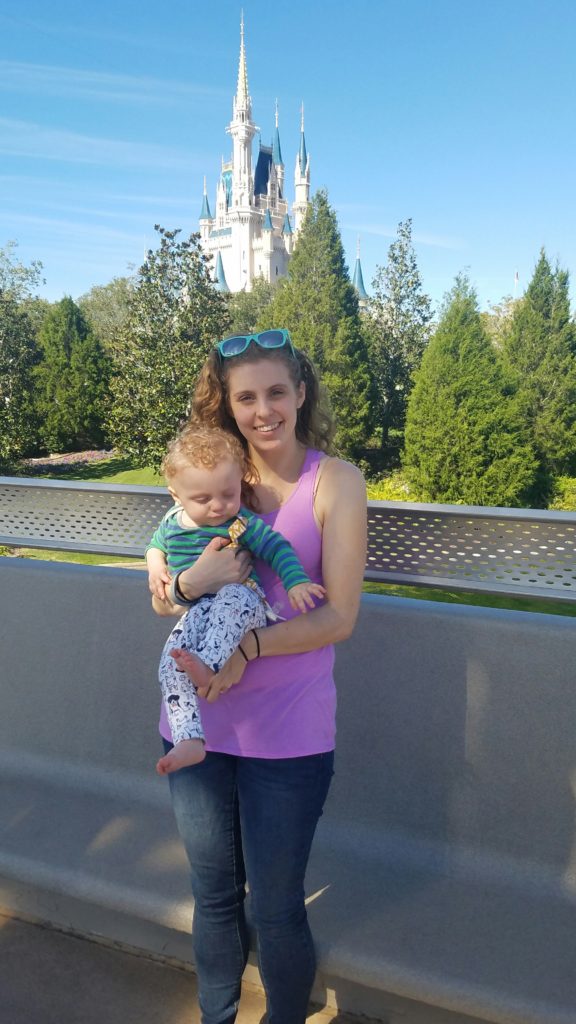 Magic Kingdom was on Wednesday and it was magical (and hot) 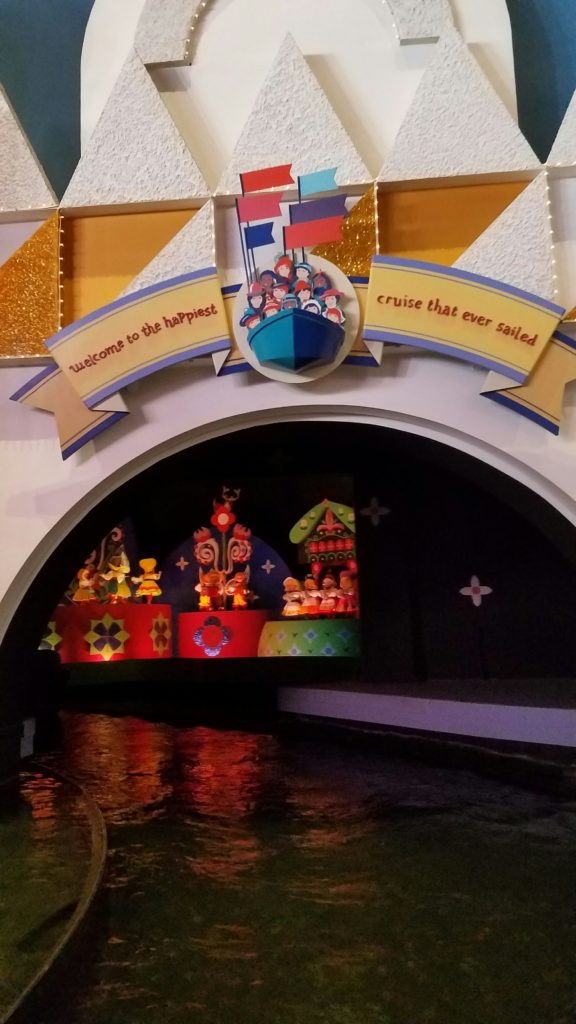 There was a requisite ride on the creepiest ride ever. 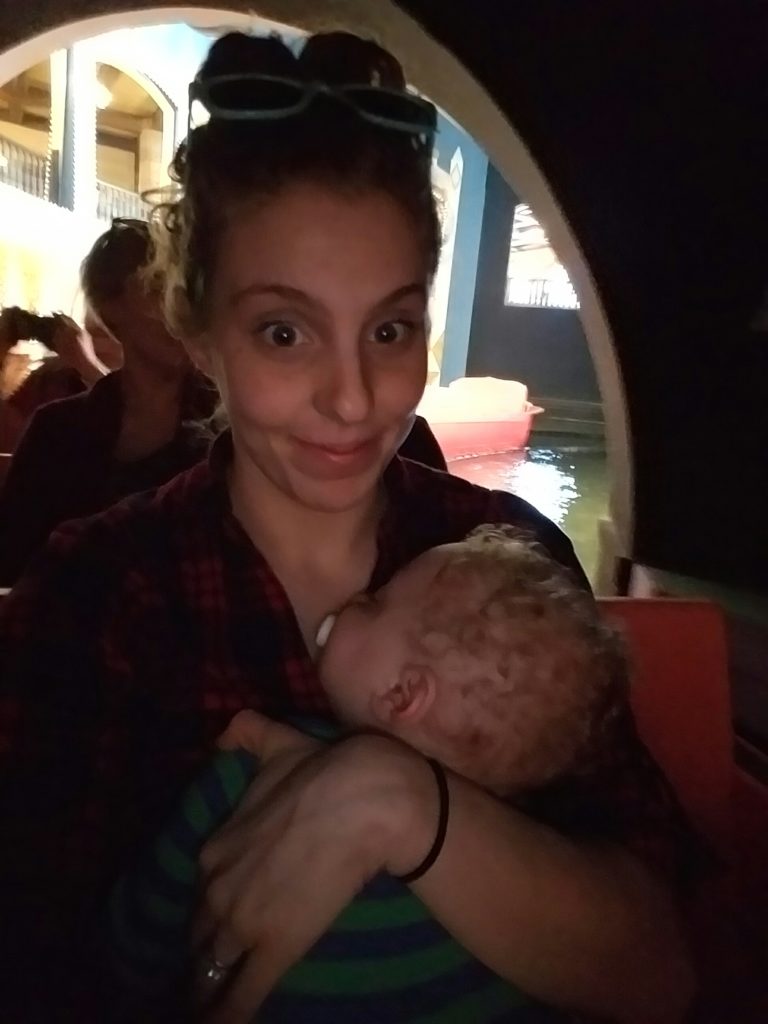 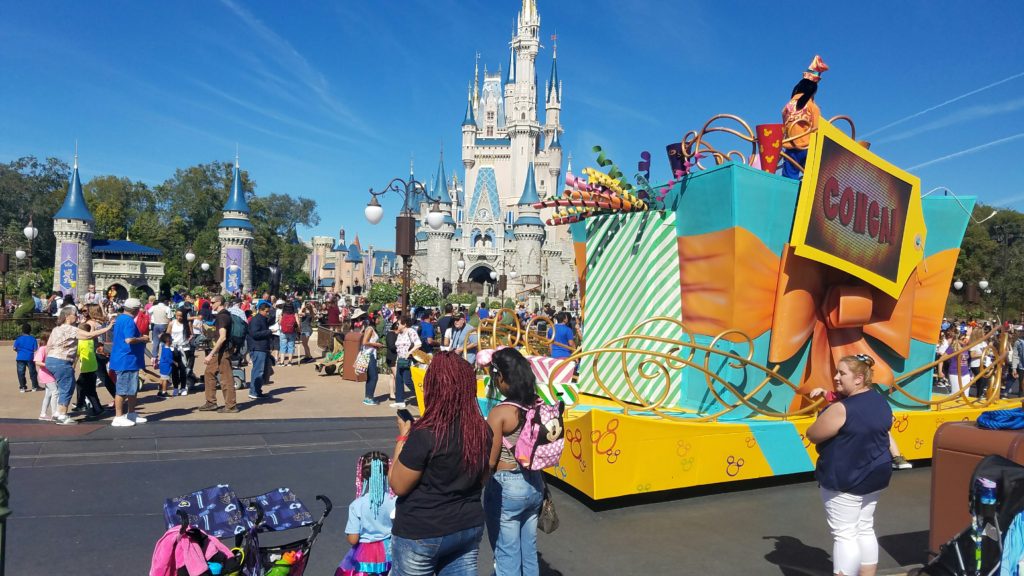 A few rides and then Ryan’s (surprisingly) favorite – the street party they hold daily. He was so into it, and it made my heart happy. We skipped characters (lines!) and character breakfasts since we weren’t sure how he would act with them – read, screaming and crying – and it’s not cheap, but I feel like this was a great way to dip his toe into it. 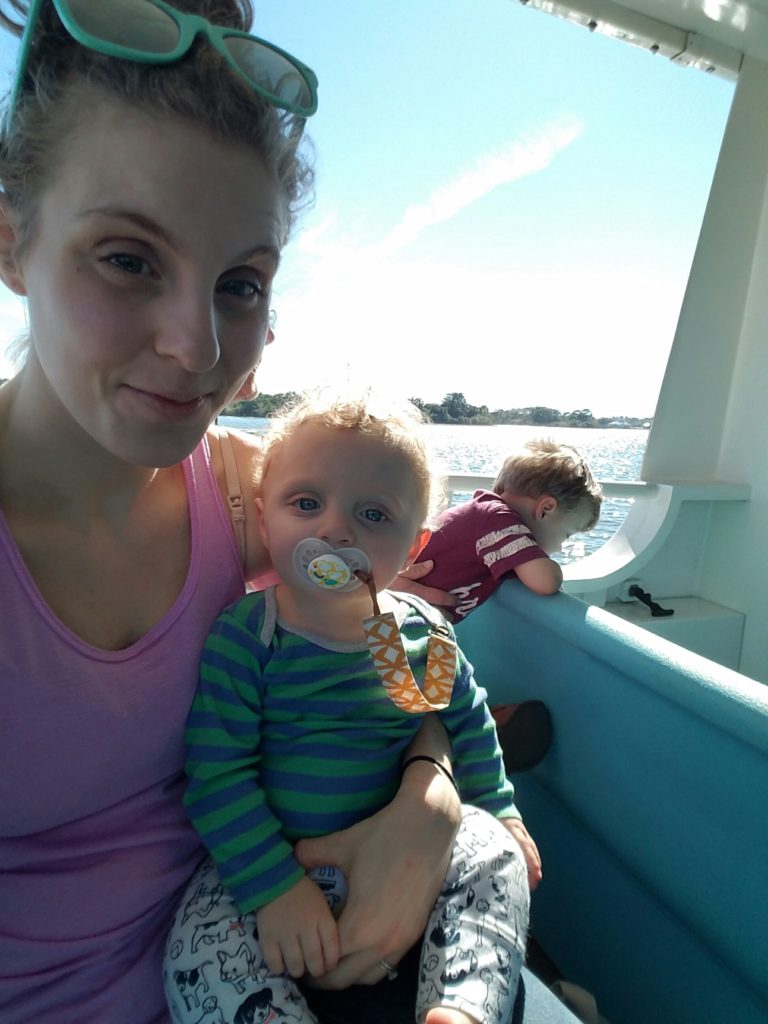 We took the ferry back to our hotel, which Ryan loved and then went to the Polynesian for dinner later. Not going to lie – I was a crappy blogger and took little to no food pictures (WHO AM I?!) but yum. 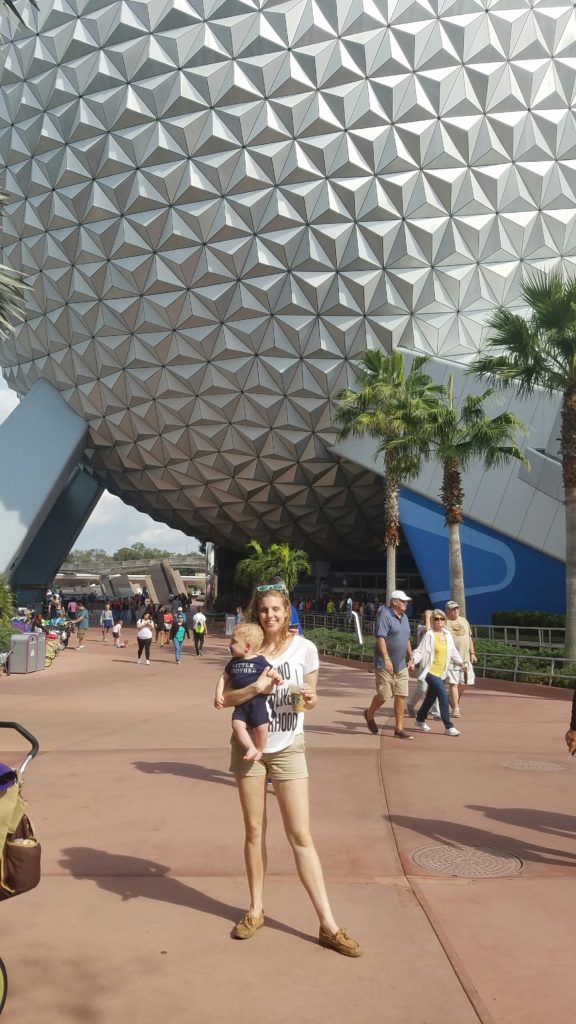 Last minute we decided to do Epcot on Thursday before leaving on Friday. This was mostly for us, and I’m not ashamed to admit it. We did the around the world thing, ate some yummy stuff, and hung out. There’s not much for little kiddos but we liked showing the kids the different countries. 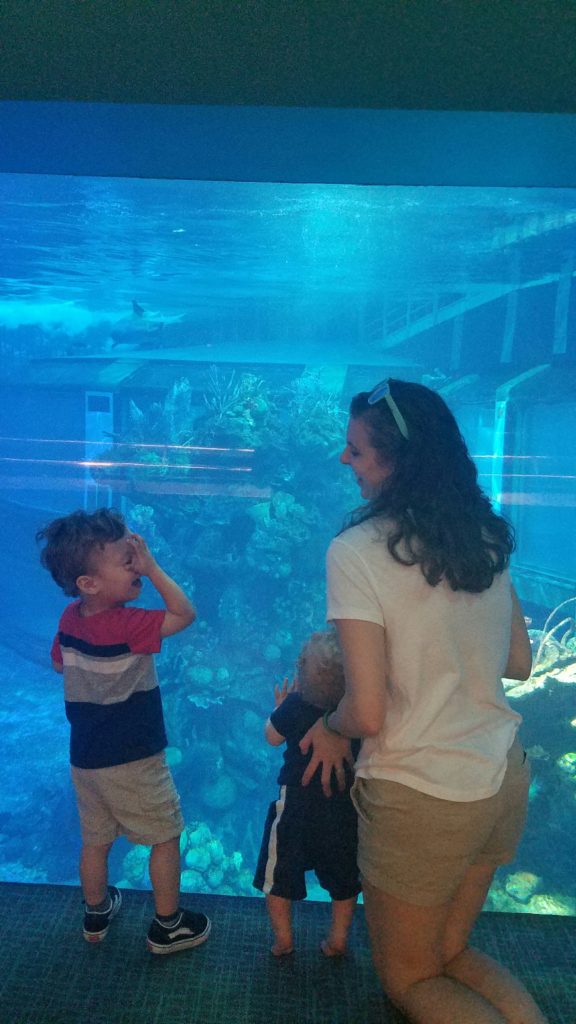 there was also a Finding Nemo ride (might have been Ryan’s favorite the whole time) and a pretty big aquarium thing which we dug. Dolphins! Manatees! very cool. 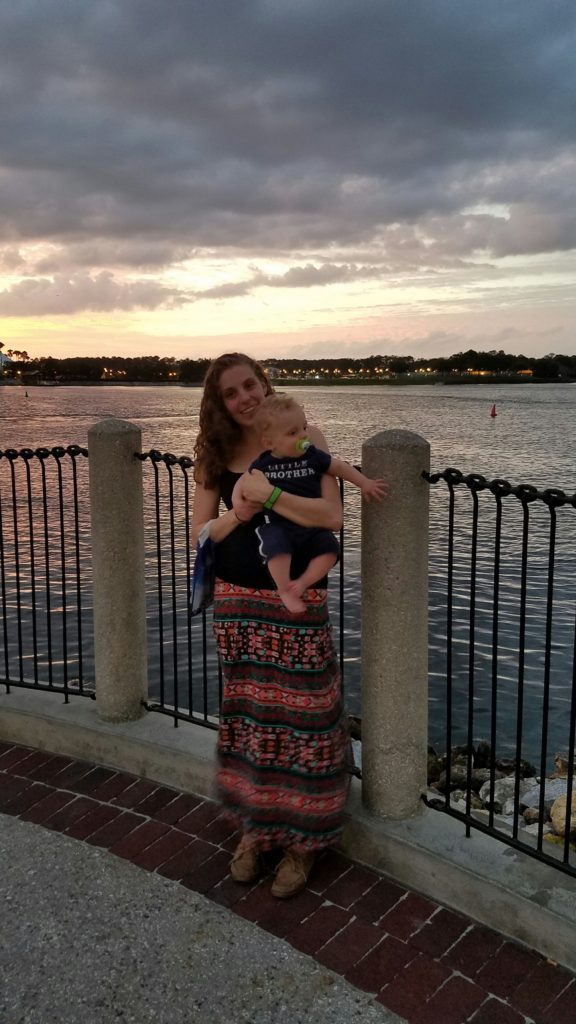 We went to Chuy’s again for dinner (no shame, can someone please open one in NJ?) before going to wander around disney Springs. I tried to get Ryan in this picture (as always) and he refused (as always). And that’s it! The ride home was long, but we made it home in one day!

PSSSSTTTT this was supposed to go up at my normal AM time but we’re in the process of switching Ry to a big boy bed which means he didn’t fall asleep until after 10. And after that I was just too emotionally drained for much more than a shower to even remember this post, ha!

OKAY so tell me – WHAT DID I MISS THIS WEEK!?