Hello everyone! Hope you’re all having an okay Monday. I was going to write “great” there, but then I thought, let’s be real, Monday. Even though I’m a SAHM Mondays usually look pretty rough in these parts. Sunday nights I put off my nightly routine in favor of hanging with the hubs before he leaves for the week. Add in a 3 am wake up for Alex and general confusion on behalf of Ryan and Cooper as to where Daddy is, it can get a little hectic.

We had a pretty fun weekend, considering we were originally supposed to do an anniversary beach weekend that was rained out. Womp. Saturday was very low key since there were thunderstorms in the area and we didn’t want to leave Cooper for long. He gets very scared during thunderstorms and basically spends the entire time trying to get in to Ryan’s room and shaking. (He’s not allowed in Ryan’s room and we keep the door shut after one too many diapers eaten and the pure fact that he eats wipes in one gulp.. Yellow Labs, people. Yellow Labs.)

There was some early morning Mickey Mouse and running out to buy some random Craigslist find for Alex.

who needs a learner's permit? not this kid. (before you freak out, the car wasn't even on.) #13months #momlife #drivingbaby

Sunday was no rain in the morning, so we went to the park for some swing time! 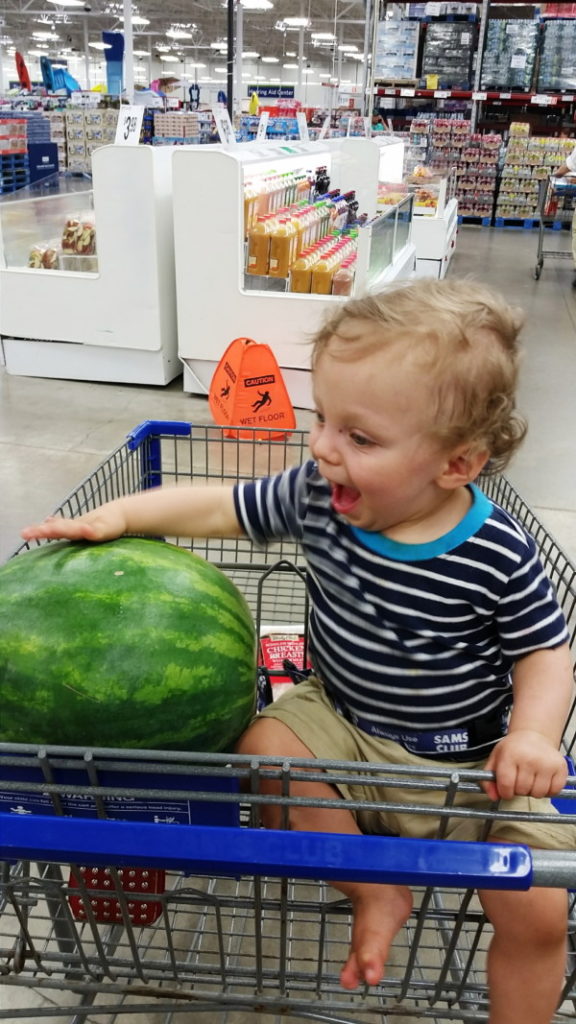 Then went to buy the essentials before heading to get lunch. Clearly the watermelon love is genetic.

Alex’s best friend from tech school was at the racetrack that’s almost the halfway point between us, so we grabbed some essentials and took the drive down. (Caramel Macchiato for the win. I usually get the skinny one or a Misto, but Alex ordered while I was in the bathroom and I was one.happy.lady. Whole milk all day.)

The track is pretty boring if you’re not into it, but the new girlfriend of Alex’s friend was there who was super nice and I love her, so that was fun. Ryan was VERY interested in the cars going by. (If you’re interested, which I wasn’t, it was Englishtown Raceway Park, imports and drag racing.) We weren’t sure how it would go because it can get a little loud, (we actually ordered him earmuffs last week and are waiting for them. Timing sucks sometimes) but he was SO good. In fact, the only time he cried was when we covered his ears a few times if a louder car was passing. He hates hats and sunglasses, so I have a feeling earmuffs wont last long either.. FYI: nothing was crazy loud, it was just a precaution. I’m not the worst mom.

We had an unpictured-because-I-spent-the-whole-meal-sharing-with-Ryan dinner out at our favorite Greek place, (Pithari Taverna is sit down, BYOB with a connected Greek liquor store, and so so good if you’re in Central Jersey. Start with the homemade loukaniko, get the chicken souvlaki, and ask for more of their hot, fresh pita every time you’re basket is empty. You are welcome.) and relaxing on the couch with my new favorite find. I don’t know where I saw this first, (maybe on Katie’s blog?) but I’m glad I did. If you’re not like my husband and like peanut butter, go now. I love cookie dough everything so this is a home run for me. I bought ti Friday and I plan to demolish it tonight. #sorryimnotsorry

How was your weekend? Did it rain near you? Let me know in the comments!

Linking up with Katie and Erin!