How was your weekend and holiday, friends? Ours was as amazing as I hoped and I’m happy to be here to share it with you! I’ve got a lot to share this week, so let’s get to the fun! As with most Monday’s, I’m linking up this Christmas weekend with Katie and Erin!

Let’s start on Christmas Eve, shall we? Alex had work but had a weird schedule (12-8:30 rather than 3-11:30) so it wasn’t too bad, plus I had some baking to do! My brother’s Christmas present was a big box of food so I wanted to get as close to Christmas as possible to make everything in order for it all to be fresh. I made granola and fudge earlier in the week and made all of the cookie dough the day before. 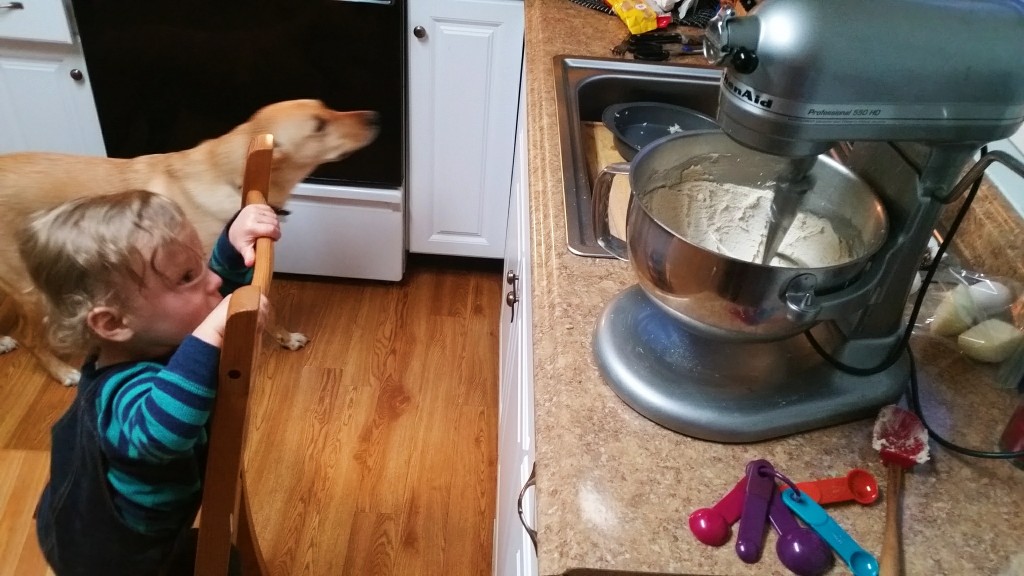 Ryan dug watching the mixer go. It made him laugh so hard. 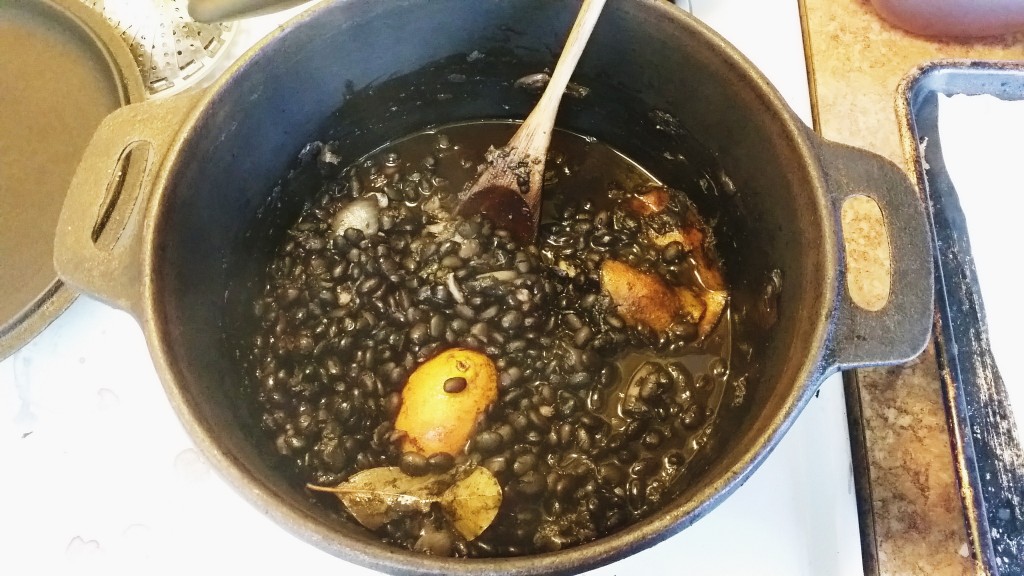 To be honest, I was running low of food since I got a little excited at the prospect of baking cookies this week. So I made a big ol’ pot of dried black beans that morning as well! (please note: this is a very important detail for later in the story.) 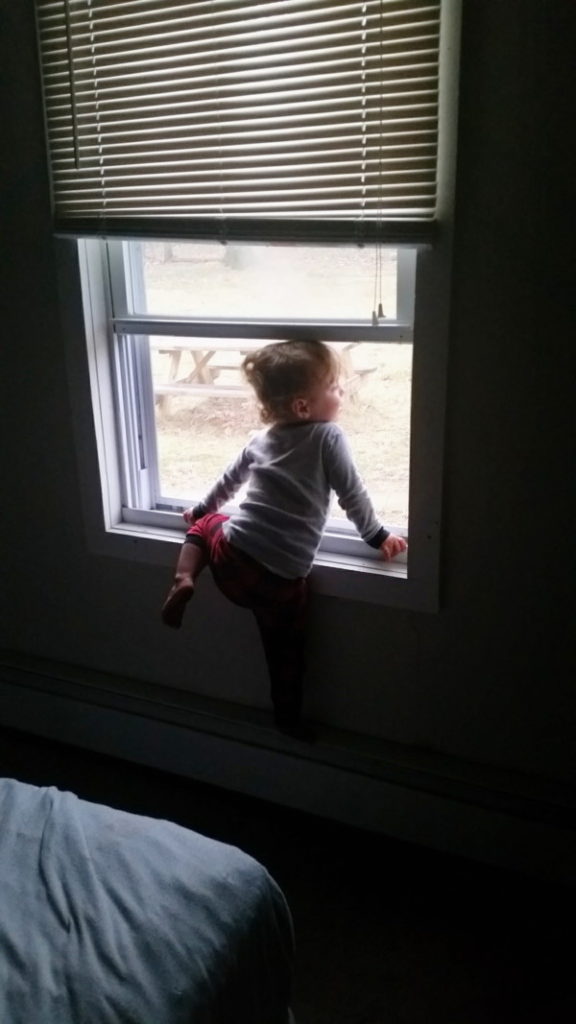 Even though it was kind of gross and rainy, it was pretty warm out, so all of the windows in the house were wide open. I’ll take it, my friends. This window in our room is Ryan’s favorite since he can watch Cooper when he’s outside and look at Alex’s truck. 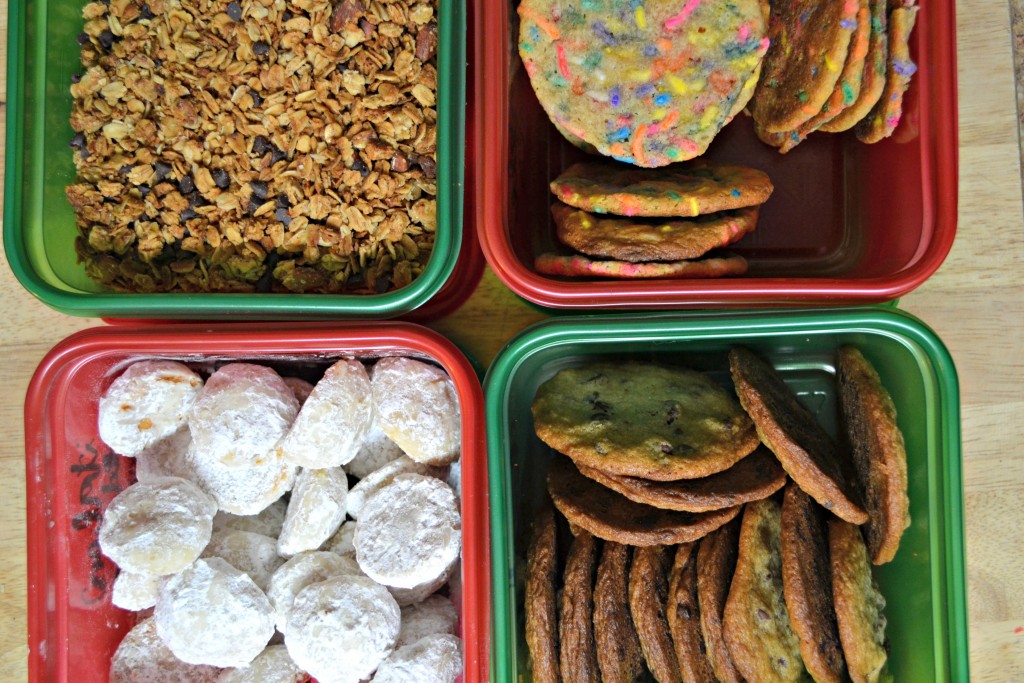 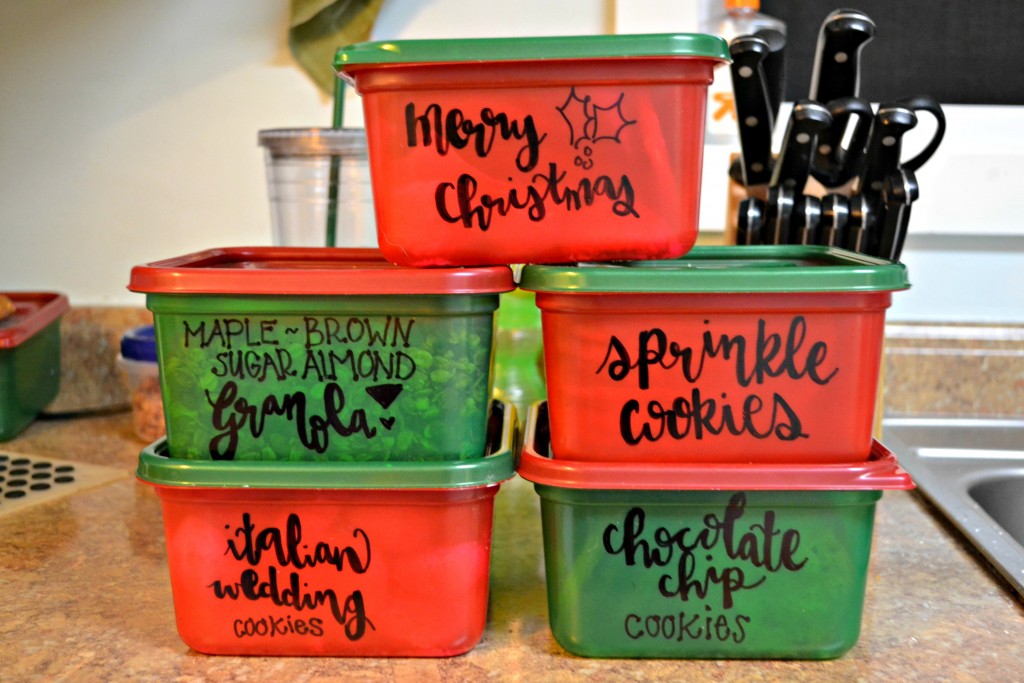 I ended up with three kinds of cookies, granola, and fudge. I even hand-lettered (my new obsession, if you’ve missed it) all of the containers and I must say, I impressed myself! (since I couldn’t pencil it first, that is.) 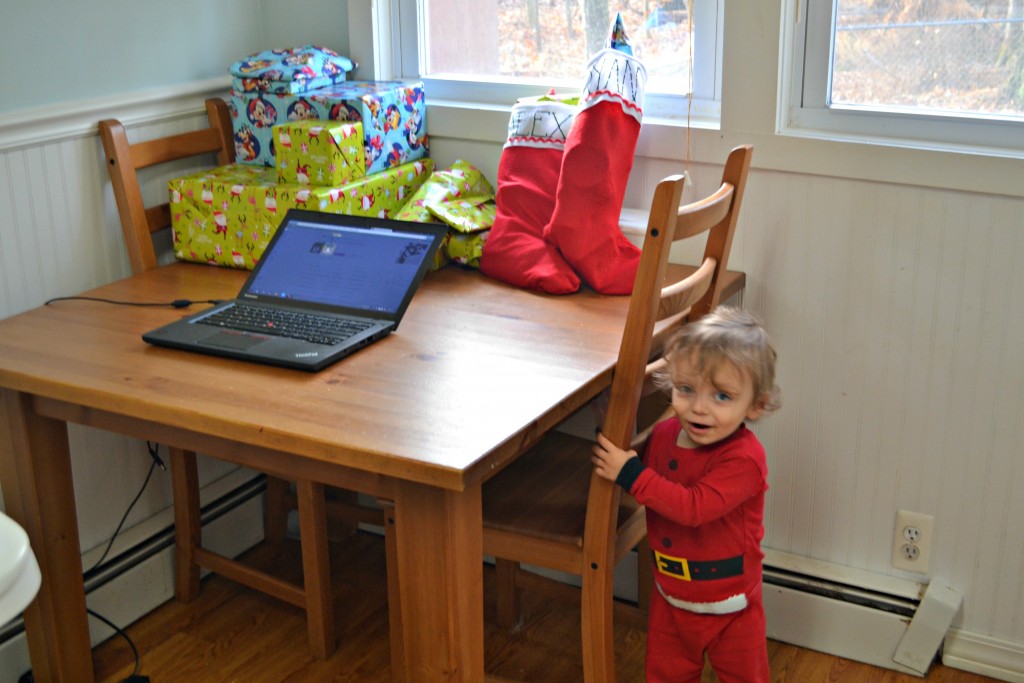 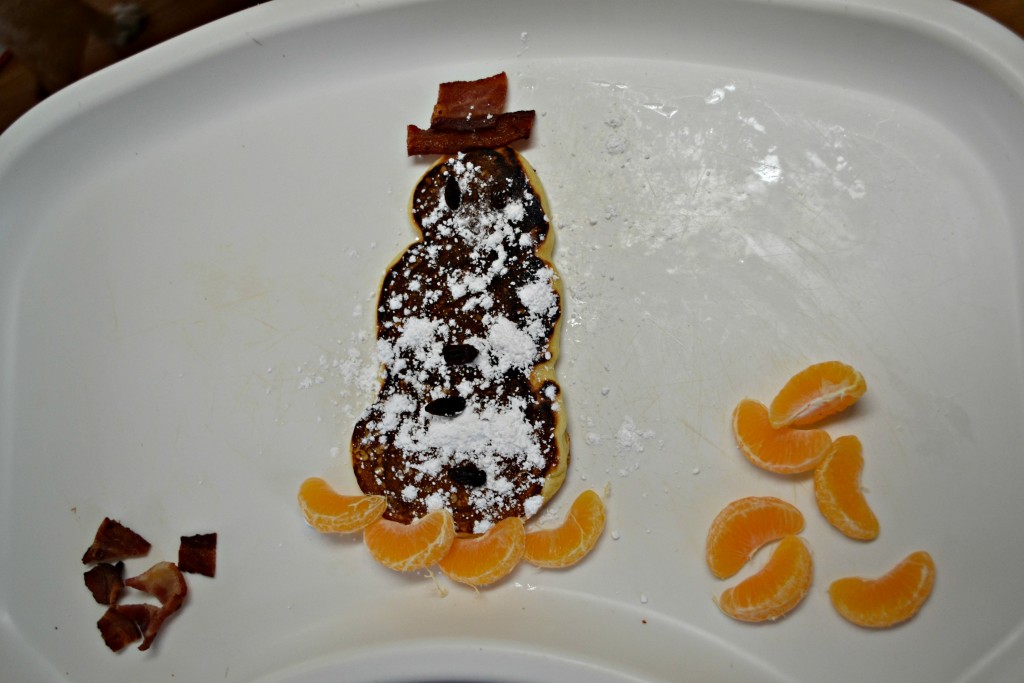 The next morning was CHRISTMAS! Ryan and I woke up early(er than Alex) and got presents set up, listened to Christmas jams, and made a big batch of buttermilk pancakes and bacon. Ryan got to eat his first snowman pancake this year, a tradition in my family. (I used this recipe which was okay. It made a ton of pancakes, which is cool since they’re in my freezer now, but they were eggy/custardy, like French toast rather than cakey like we normally enjoy.) 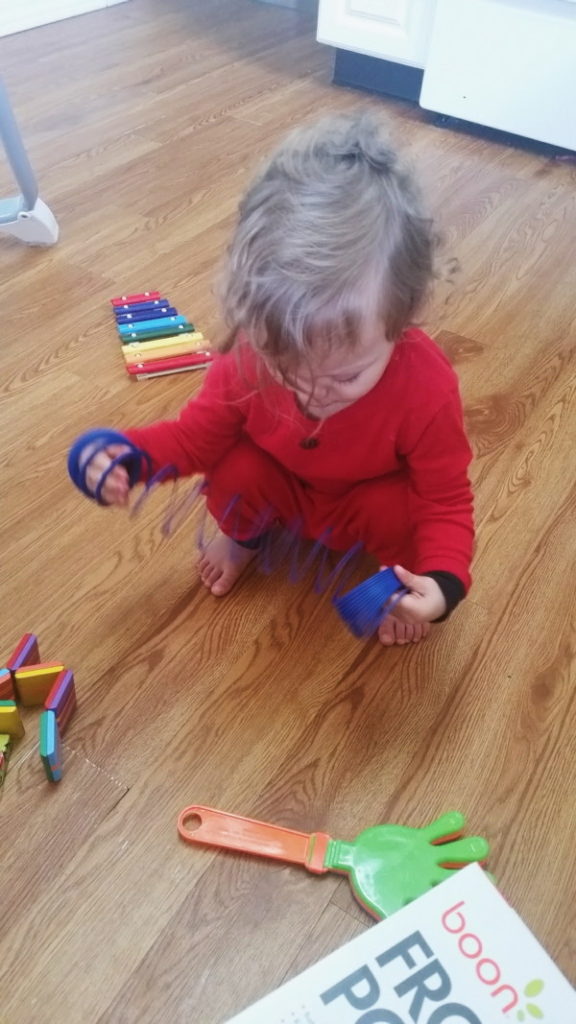 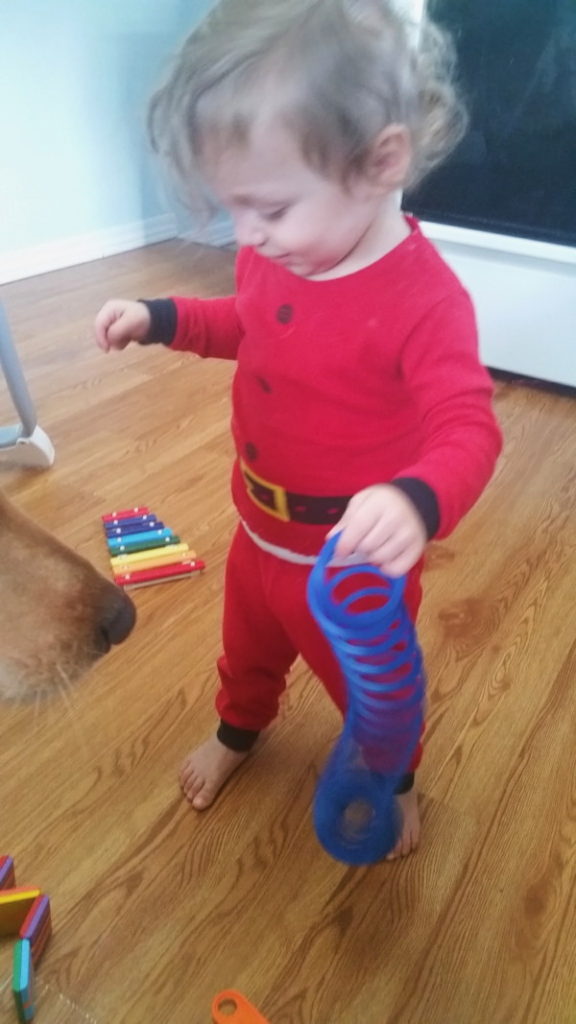 Then we opened presents. Ryan didn’t even care about opening his, so I ended up opening them while he tried to play with Alex’s new tools. The winner of the morning was a 60 cent slinky. We don’t even have stairs. #toddlerlife. 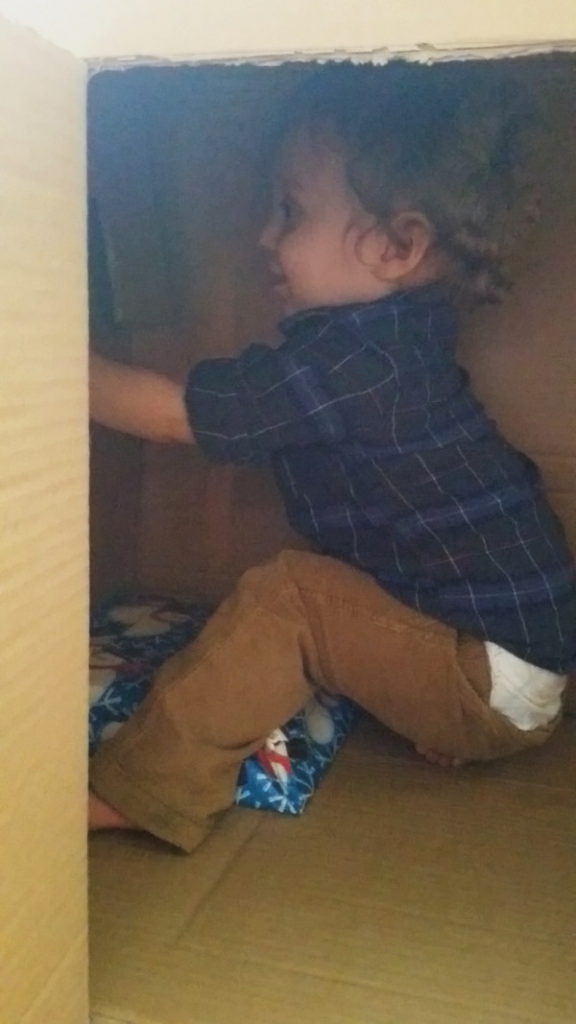 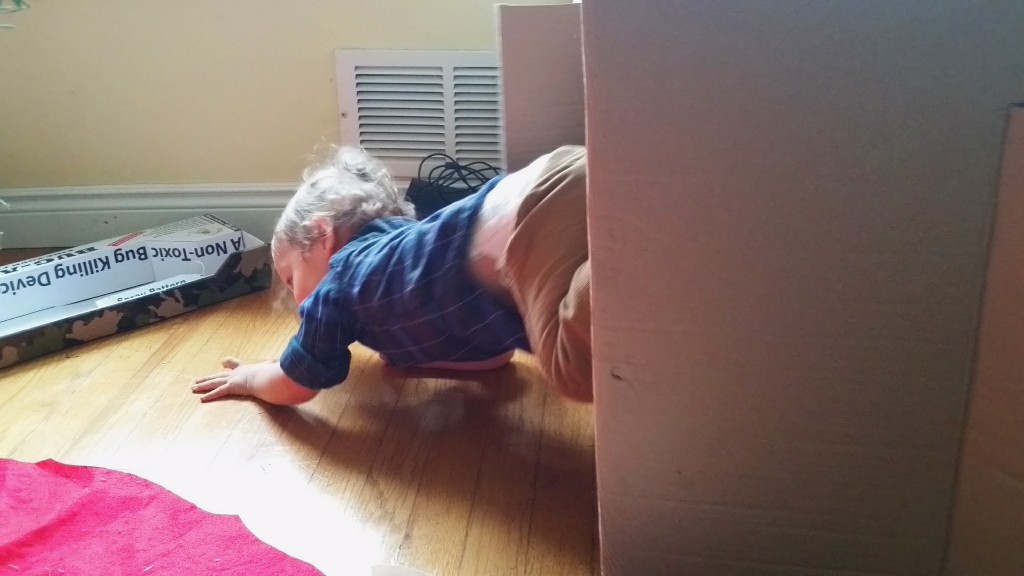 We headed to my dad’s where there were more presents – there was a HUGE box all wrapped up for Ryan to open asap. I was so annoyed because everyone knows with a small house, we don’t have room for big things. Never fear! My dad just wrapped up an empty cardboard box, complete with windows and doors for Ryan to play in, which was an all time favorite of my brother and me as kids. He didn’t quite get it at first, but eventually he was going inside, closing the door and climbing out the window. This kid.

The drive home included a little boy passing out and a Starbucks run, featuring what may be the last eggnog latte of the season. Tiny violin. It was too warm to get a hot latte so went with iced. 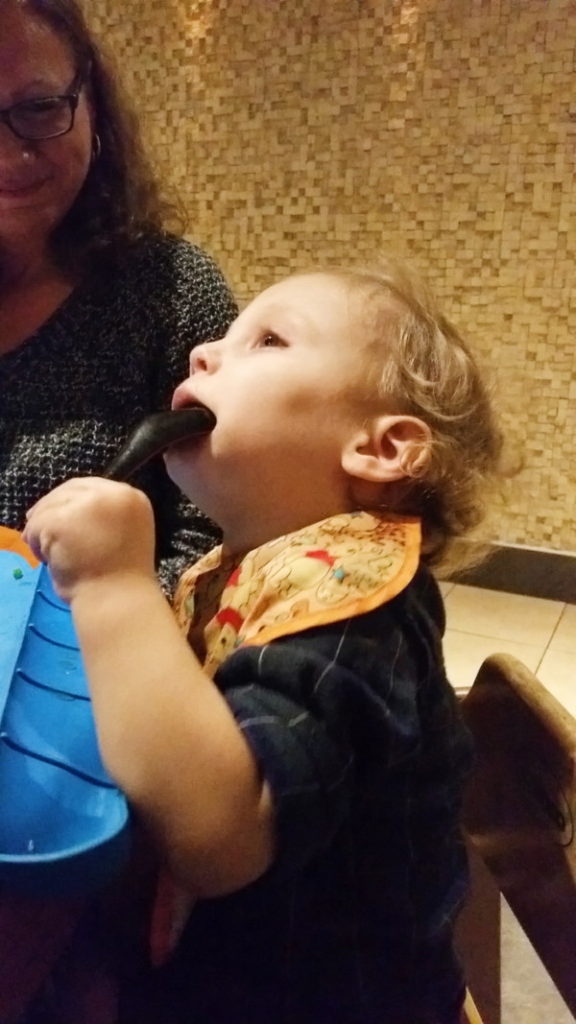 CHRISTMAS HIBACHI. You guys, best decision ever. No dishes, my forever favorite food, and Ryan thought it was pretty cool. Speaking of Ryan..

OKAY, so remember how I was saying to remember the beans tidbit for later? Yeah. As a warning, you may not want to read this if you’re eating/going to eat/not a mom who has seen it all… So Ryan woke up at maybe 10? on Christmas Eve crying, I went in and held him, he farted a few times a fell asleep. Then ALL day Christmas he kept ripping the SMELLIEST toots all day, like to the point where they were lingering with him and I was checking his diaper multiple times an hour. He had gone poo that morning so I wasn’t worried about him being constipated or anything, and he seemed happy so I just let him be a smelly toddler in all its glory.

We were at hibachi, and Ryan was digging miso soup (what kid likes miso soup? No, really.) Eventually we took it away because uhm, salt, and he started getting antsy while we waited for dinner. I figured he was just hungry since lunch was a PBJ and a banana on the run at my dad’s. We tried a toy and the Hot Dog Song on my phone before I picked him up to put him in my lap, and Alex gave me an alarmed look, and I thought he was going to say something about being careful about the bump. But then he goes, “Poop. Everywhere.” Uhm what? “There is poop all up his back.” Yeaup. And my hand is in it. I frantically grabbed a napkin to cover it, because I mean, we were in a restaurant and basically ran with poo covered hands to the bathroom.

Alex came in to the bathroom to help, which thankfully was a single person bathroom with a lock, and we went to work using 16424505825722 paper towels to wipe poop of EVERYTHING. I have never seen so much. Like on his shirt, on his feet, legs.. the worst. THANK GOD I had a onesie and pants in my bag. I just can’t. We cleaned him up, laughing because I mean, really? The best part is Ryan didn’t even cry. So weird. And also? When we got home he took another (thankfully, contained) poo. No more homemade beans for him. Just no.

merry christmas everyone, from me and the bump. the boy wanted some more #italianweddingcookies and who am I to deny him? #merrychristmas #christmascookies #christmassocks #26weekspregnant

The night ended with Christmas socks, Italian wedding cookies, and the bump. Perfect.

I hope you all had an amazing holiday. I was going to add in our weekend as well, but I think this post is much too long as it is, so I’ll just put that goodness into a second post and post it later today.

TELL ME, how was your holiday and/or weekend! Get anything good? Eat anything tasty? Let me know in the comments!