If you’re just starting out with your Baby Led Weaning Journey, check out this post where I outline Step 1, and the post on why we chose BLW! 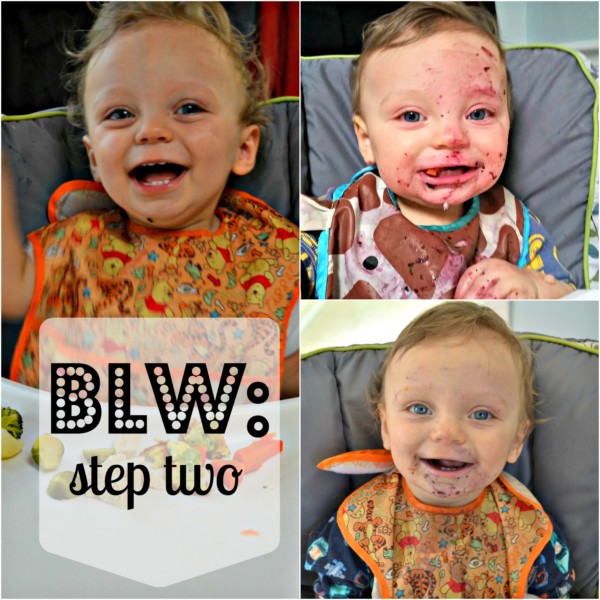 So, you’ve made it this far. It’s going well, you’ve found out your kid loves a few things and is still skeptical of a few others. And then you hit some bumps. What else should you be giving him? Why is he doing THAT? The next steps are even more fun than the first, but as with all things baby, they are even more confusing. Here is how we proceeded with BLW our son after the first few months.

PLEASE NOTE, I am not a pediatrician, nutritionist, doctor, or any combo there of. I am simply a mom who fell in love with baby led weaning while trying it with her own son and wants to share her experience with others. The intention of this post is not to give rules or even instruction, but to give another example of the possibilities and ease of this amazing method to other parents. Please always talk to your child’s pediatrician before trying anything with your child to see his or her opinion on it.

The following guidelines are things I noted and tried with Ryan starting at around months 8 or 9.

Keep on introducing more foods! –  I think this is the most exciting part of baby led weaning – seeing what your child gravitates to, what they like and dislike (for now) and sharing your favorites with them. Food is my language of love so to me it’s been such a bonding experience to cook for Ryan and show him what I love. To make this easy and stress free on myself, once we had a good base of tasty things already tried, I try to introduce something new at least once a week. This week was olives (olives are salty, and there are recommended guidelines on salt in the first year. Ryan’s very close to one year, I bought low salt olives, and I didn’t give him many, but do what feels right for you!) and he LOVED them. Sometimes I pre-plan on my calendar what I want to pick up at the store for him to try, sometimes I wing it by just seeing what looks good or fun, and other times I just give him something I’m eating. This happens most often when I’m making salads, as things are already being cut small. If your child doesn’t like something, DO NOT BE DISCOURAGED! Research shows that it can take 7 – 15 exposures (awesome article about feeding children!) before a child makes a decision on whether they like something. Don’t assume your kid hates something because the first few times it was ignored.

Decide on meals – There are so many opinions on this throughout the internet. Until our 9 month appointment at the pediatrician, Ryan was getting a lunch and dinner of solids and nursing the rest of the time. After his 9 month checkup, Ryan’s doctor suggested 3 meals and 2 snacks. We haven’t necessarily gotten the entire 2 snacks since he is still nursing a good amount, but he gets breakfast, lunch and dinner each day and usually at least 1 snack. But as with all things baby, this is going to change as he gets older.

Figure out what schedule works for you – In the same vein, you should figure out what times your meals will be served. While this is beneficial for your baby to give him a sense of what comes next, I find it most beneficial for me, so I can schedule my day a little easier. Ryan is NOT on a nap schedule (awesome.) but this is what our day looks like. All of these times are VERY VERY VERY loose, but we do try to stick to meals 1 hour after he wakes up:

Work on that pincer grip! – Around 9 months I noticed Ryan looking at broken off chunks of things with interest, so I gave him peas. Within a week he was picking up the peas with ease (I couldn’t resist, guys.) having honed his pincer grip. Slowly I started to move all of his foods from stick form to smaller bites. I actually found that he started to prefer the little pieces that he could just shove on in there. A better developed pincer grip as well as improved hand-eye coordination from learning how to feed themselves is one the benefits of BLW and people are always shocked at how great Ryan’s is for his age. I attribute it 100% to BLW. 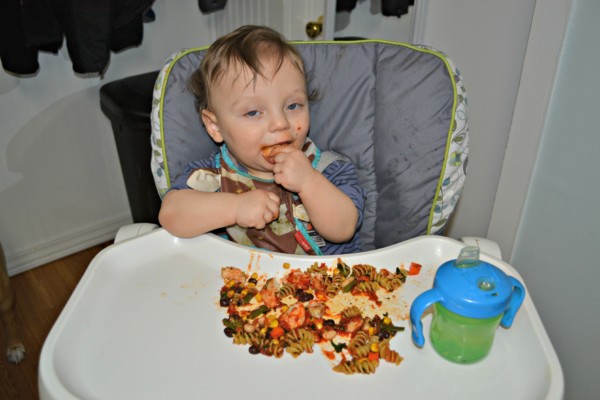 Add in water – (This is a HORRENDOUS picture, but the only one I could find with a sippy? I swore I had more..) At 8 months we gave Ryan this sippy cup filled with water. After every few bites, I would pick up the water and bring the spout to his mouth, tipping so that he understood that water came from it. It probably took a month or so for him to get the point that if he sucked, something came out (it might be quicker for children who took to a bottle, but Ryan didn’t – this is just my own experience!) but now he gulps it down. We also cut out the little piece that makes sucking required after we saw Ryan biting it to get water out faster at around 10 months. He hasn’t picked up the concept (by that I mean, has no interest and no patience) of drinking out of a straw yet, but we’re working on it.

Don’t stress out – If I could teach you anything through this, it would be this: don’t stress out. If your kid isn’t eating a ton, she might not be hungry. If your son isn’t picking up the concept of a water cup, he might just need some time. If one day he only wants to eat apples and is throwing the rest of the food while resisting being strapped into the highchair, he may be getting a tooth. (Not that that ever stressed me out of anything. Nope. Not me. Never.) Here’s an experience from our own journey.

We’ve quickly learned that, surprisingly, Alex is the worry wart when it comes to Ryan. I think this is due to my being with him all day long so I know his limits. But anyway, around month 8, when Ryan really started to get into food, he had about 2 or 3 weeks where he would put something in his mouth, chew once, put in something else, chew again and repeat until his entire mouth was full and would gag until he spit it out. I knew to just let him learn that it wasn’t cool to do that, but Alex would freak out and stress out. He would try to take the food out of his mouth or take his food away until he was done.

Thing is, the times Ryan ate with his dad around during these weeks, he would gag more, spit more, and cough more. Ryan felt Alex’s stress and wasn’t being allowed to learn when to stop putting in more food, since Alex would manually take the food out of his mouth. Long story short, to compromise we both brushed up on the baby Heimlich and CPR, I showed Alex a few articles on choking versus gagging, and when feeding Ryan I would only give him one piece of each thing at a time. Eventually, Ryan learned that chipmunking his food was no fun and got over it. Just use your intuition! Eating is a natural concept for a human, but the mechanics of it must be learned, like any skill.

Now go enjoy showing your little one the joy of food! I hope this helps clear up the mysterious BLW a little bit more. Below are a few different links you may find helpful during this stage!

And if you’re still in the beginning stages of BLW, here are my first 2 posts on the subject:
BLW Stage 1
Why We Chose BLW

Did you introduce solids with BLW? Do you plan on doing so? What do you think of the process? Let me know in the comments!