Hello, my friends! I am BACK from a week in Austin and I’m not gonna lie – while I love travelling as a little family, daaaaamnnnnnnn it feels good to be home. It’s so easy to take the conveniences of home for granted, but I always find that after I’m away for any length of time I’m so thankful for simple things like knowing where the closest drive-through Starbucks is or having an unending supply of raisins in my cabinets for a particularly raisin-obsessed toddler.

Last week I shared my Austin eats up to Tuesday for WIAW,  and today I’m finishing up with another full day of eats + so random stragglers that shouldn’t be forgotten! 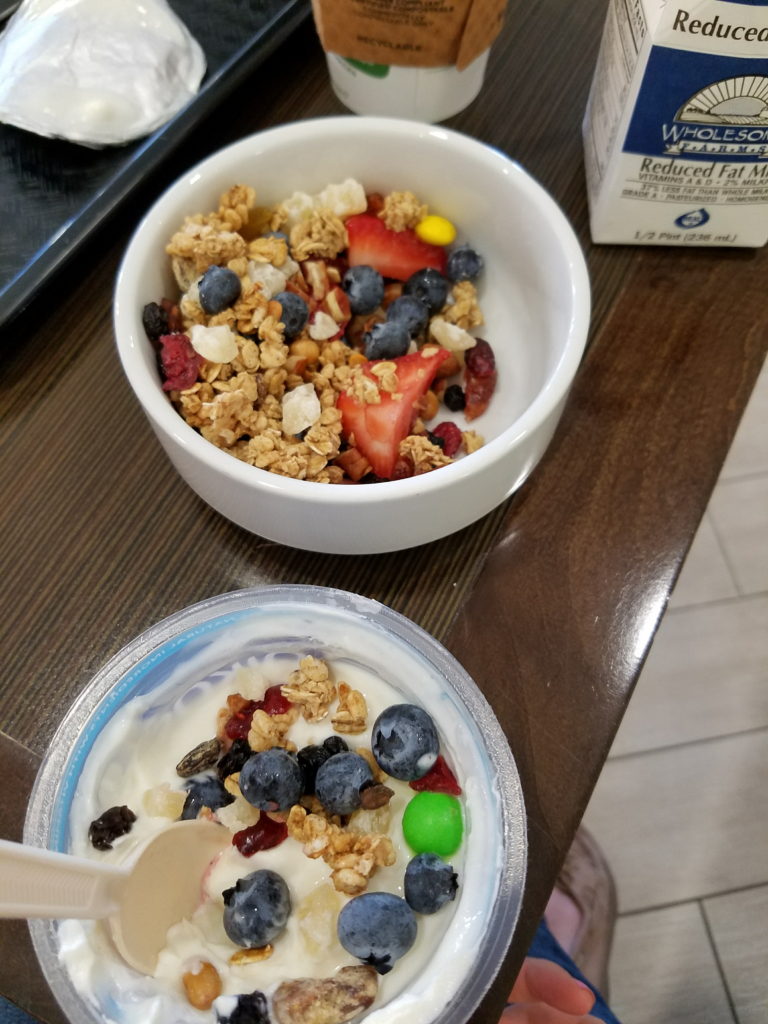 Breakfast: Our hotel (Home2 Suites by Hilton in Cedar Park, if anyone is looking. The suite we booked (fancy, I know) was super affordable, had a closed bedroom separate from the living area – which we later would realize was much more vital to a happy nights sleep than we realized – and was about 20 minutes out of the heart of Austin.) had a decent free breakfast set up and since neither Alex or I are big on breakfast we hit that every morning to try and get something in Ryan’s belly to avoid the hangry toddler later in the day. Every morning I pretty much got the same thing – a plain Greek yogurt + a bowl of fix-ins. Usually berries, granola, dried fruit, occasionally Cheerios. They also had microwavable breakfast sandwiches and eggs as well as a waffle maker but I never tried either. Plus the all day coffee bar. Not great coffee, but ‘free’ coffee so waddup. 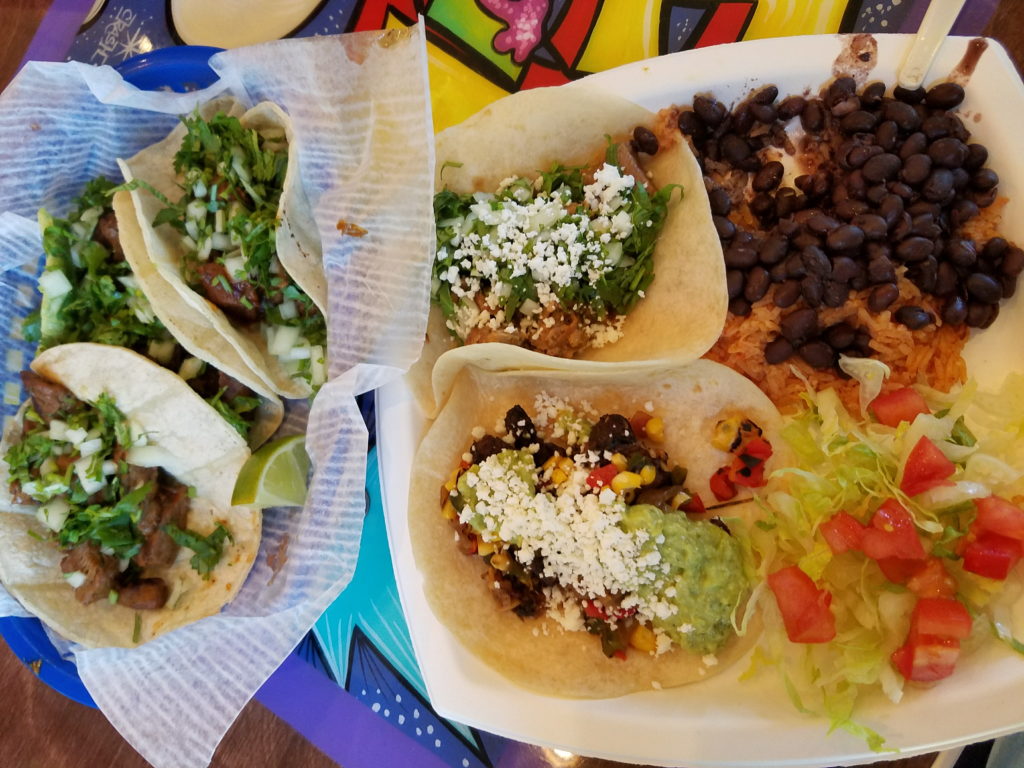 Lunch: Alex deemed this day the end of our BBQ-vacation (no hard feelings on my end – there’s only so much smoked meats this chick can eat) since Ryan wasn’t feeling it too much, and to be honest, our vacation ended up being more of a taco-cation (happy feelings from this chick, who can eat tacos all day long. All. Day. Long.) We went to TacoDeli for lunch which was a good call and I got a Puerco Verde taco alongside a Cowboy taco. Both were delicious, but I call the verde a winner, since the Cowboy was almost too spicy for me. Ryan got the most adorbs cheese quesadilla and shocked us by downing it before either of us were really done eating. 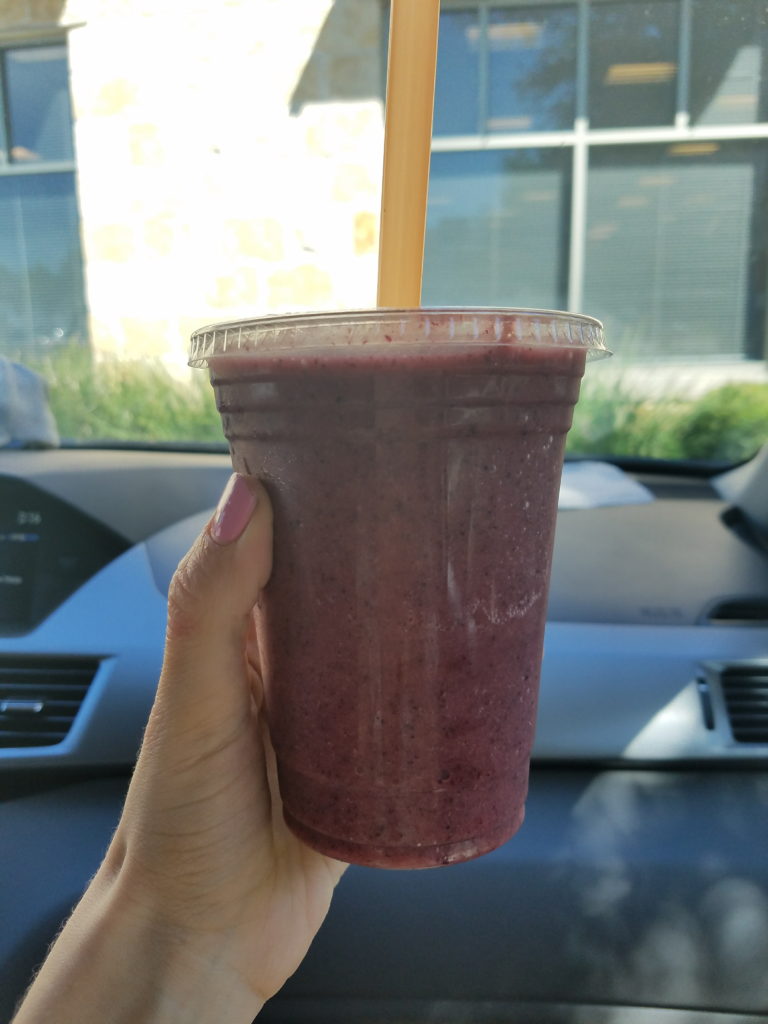 Snack: We headed to Veracruz taco again to get smoothies. You saw on my last Austin Eats that I got a mango OJ smoothie that was so delicious, but I wasn’t really feeling a smoothie so I got a mango agua fresca which was basically water + blended frozen mango + a little blended ice over ice cubes. Super refreshing and the thing was HUGE. I didn’t get a picture, but here is Ryan’s strawberry, banana, blueberry, OJ smoothie instead 😉 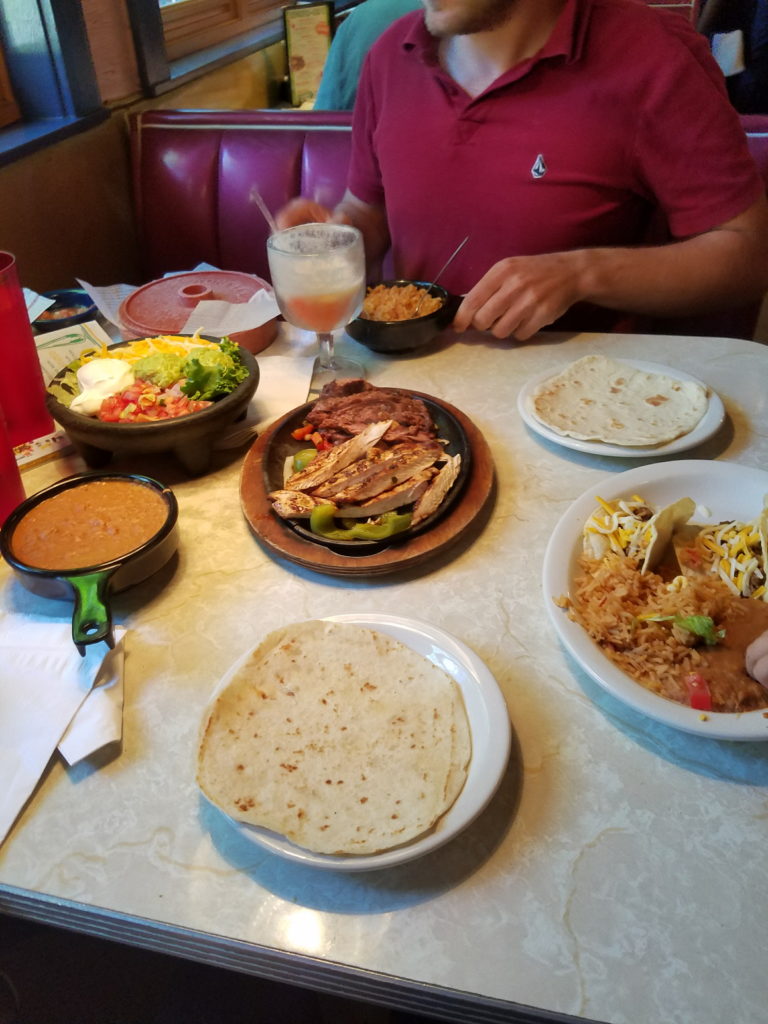 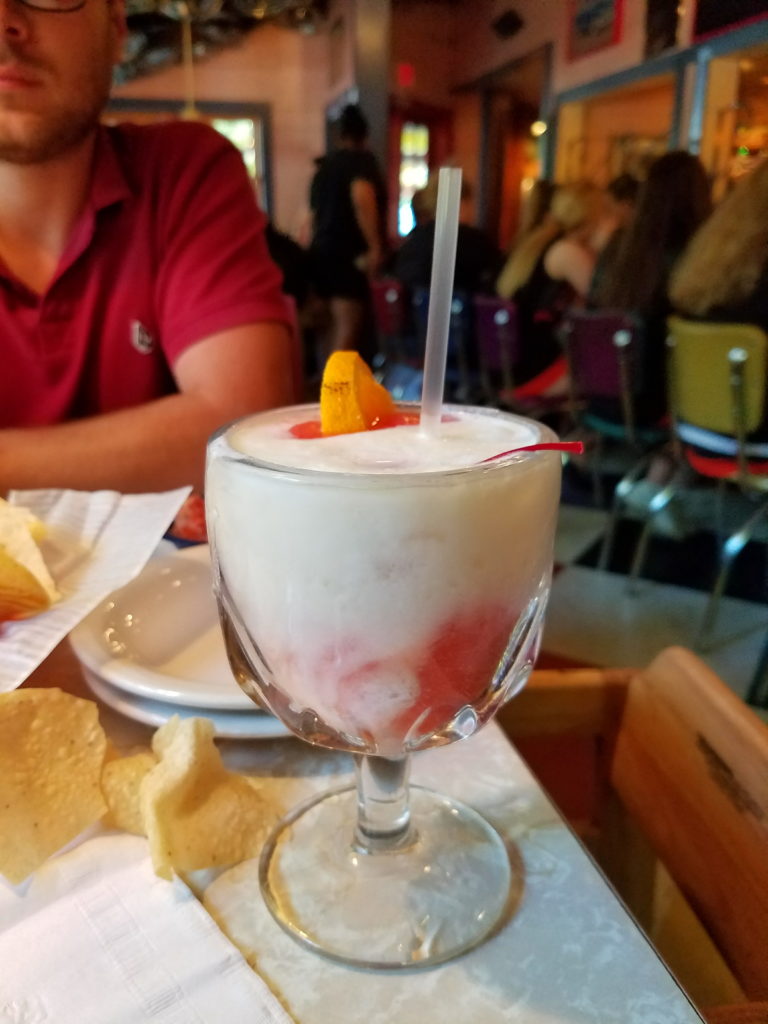 Dinner: We had a long list of places that we could have tried out, but instead we went to Chuy’s, a chain that started in Austin. Fajitas for two was the way to go plus my first grown up drink in probably 2 years. This pina colada – strawberry margarita swirled frozen drink was everything I have ever dreamed about alcoholic drinks while pregnant.

What else did we eat in Austin? (besides every thing..)
There was a trip to La Barbeque (our last bbq stop) which was delicious but put the final nail in the coffin for our hopes of managing a second trip to Franklin BBQ. We went last time we were in Austin, and if you’re familiar with the legendary Franklin BBQ, you know that the line starts to grow at 7 am, but food isn’t served until 11. Yes, I was 8 weeks pregnant with Ryan, morning sickness and all, standing in line for 4 hours for BBQ. I will never forget when the guy in front of us told Alex I was a ‘keeper’ when he told him that I had sat in a car for 25 hours and then stood in line for barbeque. Anyway, we stood for about an hour for La Barbeque and it was not enjoyable. At all. 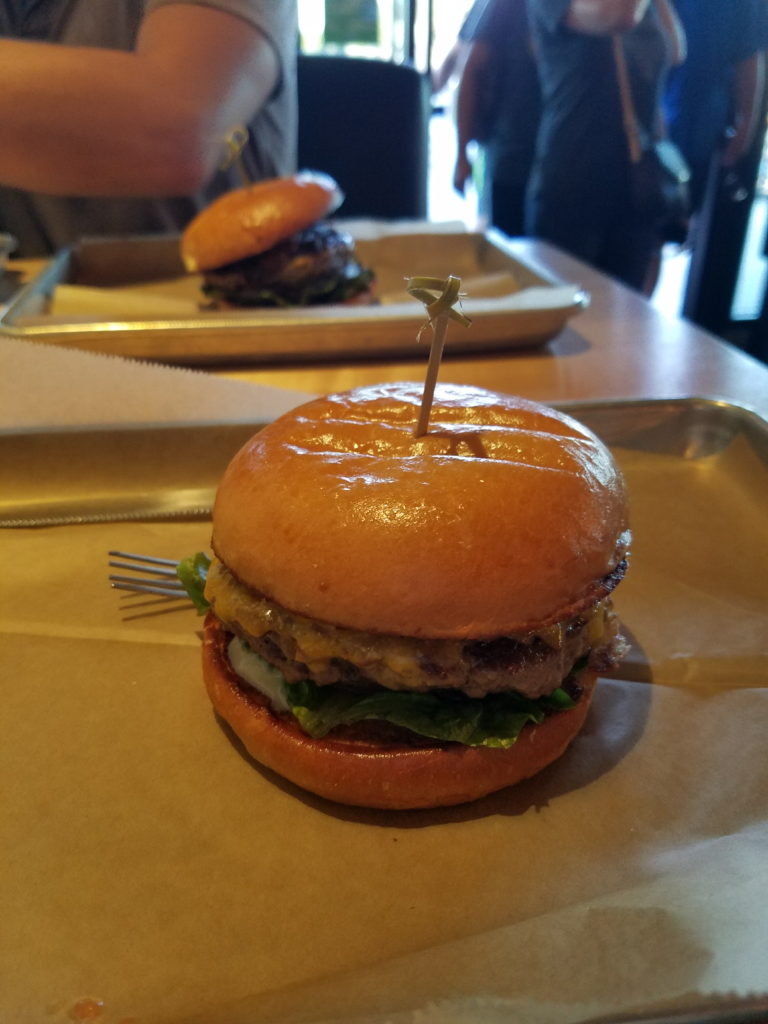 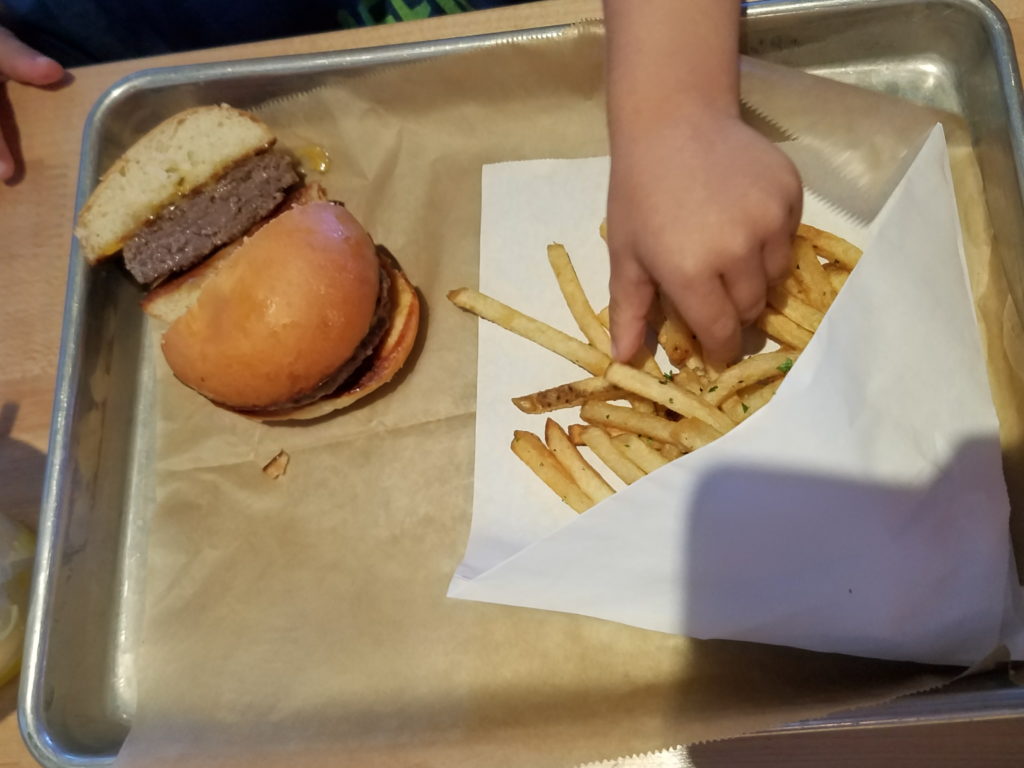 A burger with a bunch of toppings I can’t remember plus truffle fries covered in Parmesan from Hopdoddy that took us by surprise – we definitely didn’t expect that place to be the sit-down spot it was, and it was soo good. Plus, how cute is the tiny kid’s meal burger? 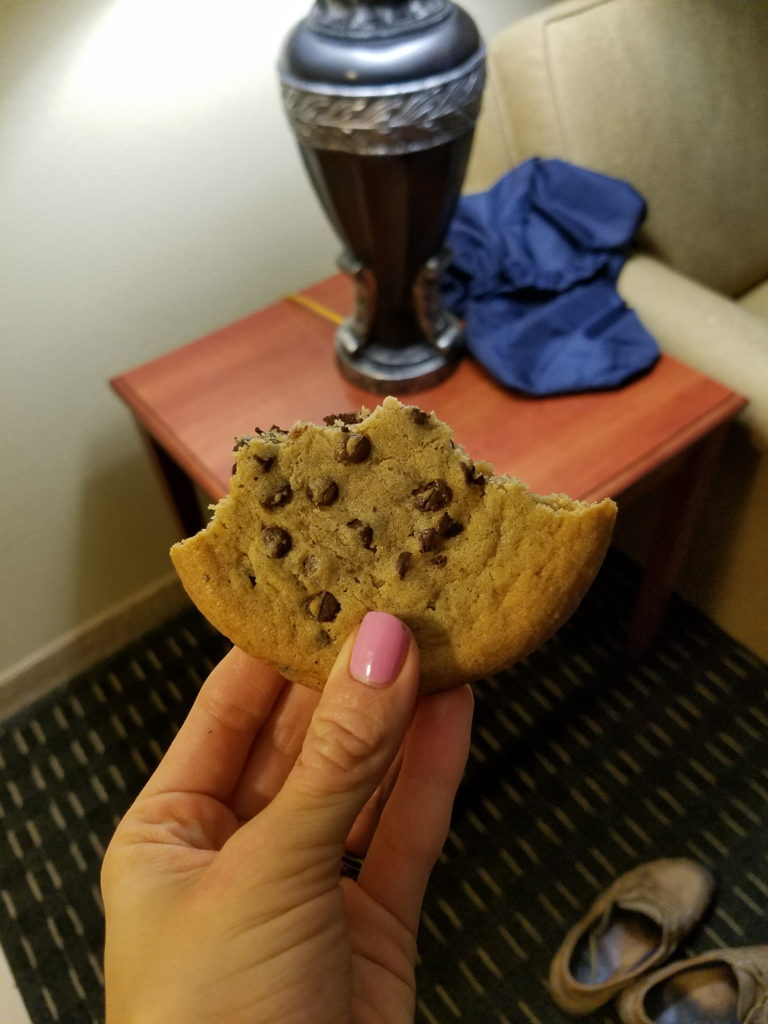 A stop at Panera that went unpictured after the first day of our drive home. (pro tip: split the drive home up – get down in one day, home in two.) After 12 hours driving, I found it impossible to say no to the $.99 baked goods they offer you when you buy a meal + drink. My first job was at Panera, and I’m pretty sure I lived off of these cookies – they are the perfect cookie to me. 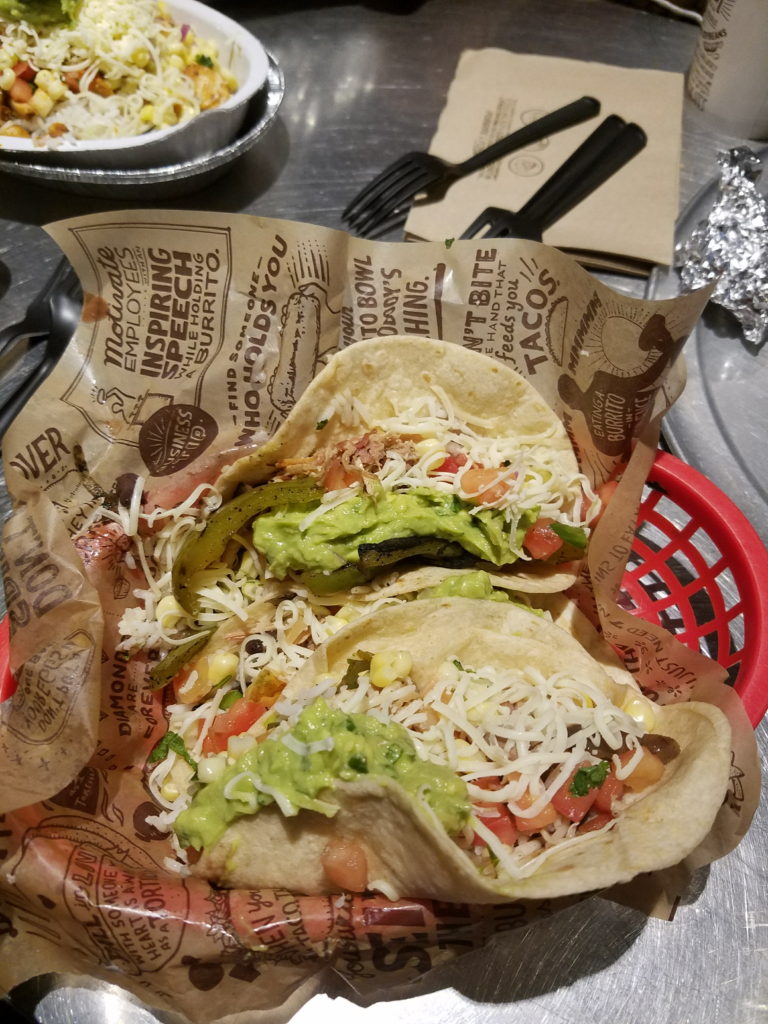 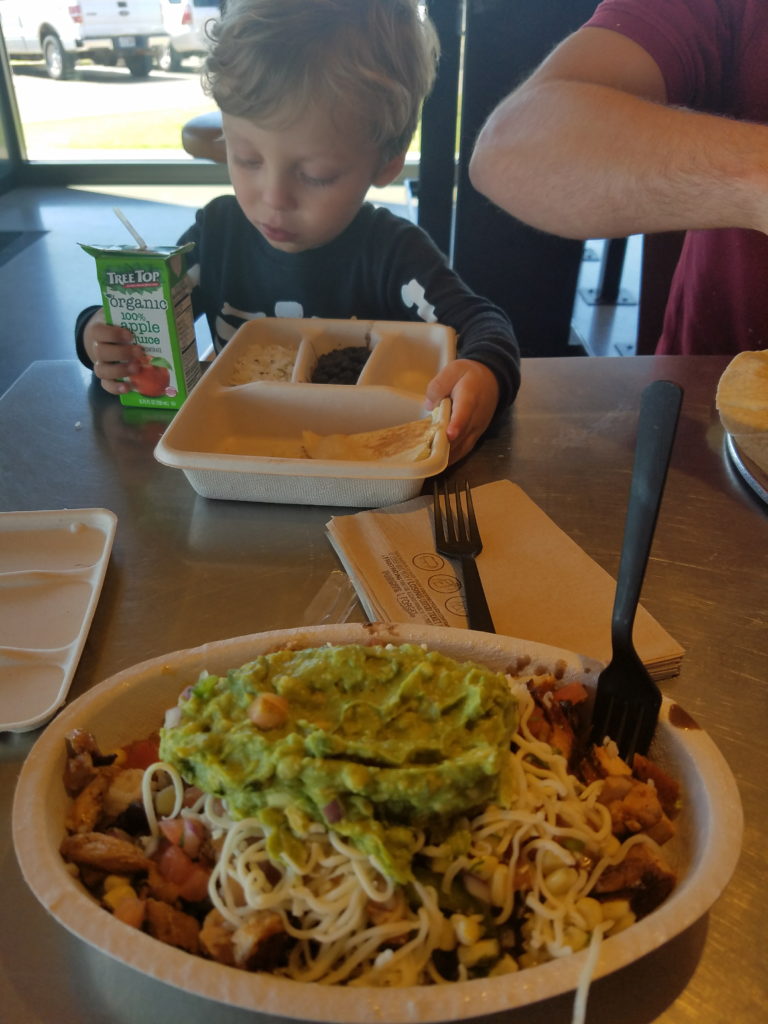 There were a lot of Chipotle stops on the way there and back. It’s the place that I know for sure Ryan will eat a good meal, the only fast food that doesn’t totally feel like junk, and there is usually one in each city. On the last stop on the way home, I stepped out and got tacos. Alex made fun of me because I claimed I wanted something different but I literally got my exact burrito bowl in taco form.

I probably am leaving some things out, but I definitely didn’t use my phone/camera nearly as much as I thought I would – always a sign of a good time (or, more accurately – a sign of having 2 children under 3 who inevitably both need all of the things the second food comes)

Okay, so tell me – favorite road trip food stops? Favorite vacation food? What did I miss in Austin? Let me know in the comments!

If you’re planning to hit Austin with toddlers, you need to check out this post: Things to do in Austin with Toddlers