Happy Wednesday, friends! For this week’s What I ate Wednesday, I’m doing a day in the life! I rarely remember to do them but I always plan to do them. Make sense? No? ehh, welcome to my life.

I should note a few things: this week is weird because Alex is working mornings instead of nights. Also, I ate like crap today, I’m not realizing. When my ‘schedule’ is off, I can’t figure out life and eat at weird times and eat weird things. IDK. I’m weird.

Okay, enough babbling, let’s get to it!

530: Alex wakes up for work. He has a morning shift today, so he has to leave early to avoid traffic. I worry that he’ll wake up Owen but thankfully Owen sleeps.

6-6:30: Owen wakes up at some point and I just bring him into the bed and feed him while half asleep. Wake up for good around 6:30 and do the whole diaper change thing. Hang out and make coffee while waiting for Ryan to wake up.

7:00 Ryan wakes up. Every morning, Ryan wakes up and demands raisins and his shoes. Do our little routine and he’s off to play with trucks. Share bread with him because he sees me going for it.

7:15: Make more coffee, eat some bread and butter, and work on on blog stuff/write to do list.

7:40: Start breakfast for Ryan. Throw a pancake I froze after Halloween into the oven and cut tomatoes and grapes before starting to put away laundry. realize Owen had a poo emergency which is probably why he’s being super fussy. (In my defense, he had on a microfleece sleeper so I couldn’t see it! Change him, finish putting away laundry, check on Ryan’s pancake.

7:55: It’s ready, so I put on PB&J. Feed Ryan. Fight with him about how he can’t just drink milk for every meal. Agree to give him water with a splash of juice <– mommas, best trick I have. He think’s he’s drinking juice, but he’s really mostly drinking water. Strip sheets and go to toss them into the wash only to realize that there’s half a load in there already (HOW? I just did laundry yesterday) so throw just the sheets and a towel in a start it, leaving the comforter on the ground. #zerocares.

8:10: Work on this post. Ryan’s eating and Owen is kind of entertaining himself.

8:15: I jinxed it. Owen is whining and Ryan magically has a clean plate and is screaming all done. I ask him if he gave it to Cooper and he says no. Not buying it. JK it’s all in the bed of his toy dump truck. Awesome.

8:20: Decide to make an attempt at getting Owen to nap since he’s clearly cranky and Ryan’s distracted by his dump truck breakfast. Rock and nurse him while doing some Insta stuff.

8:50 Owen’s up. Kind of bummed it was so short, but that’s been mostly normal lately, especially with a loud toddler. I got a good amount done, though, so I’m okay with it. Sit on the couch and feed Owen while Ryan watched ‘toons.

9:50 End up playing with the boys and watching paw Patrol for about an hour, taking pictures and having fun. It’s rare that I spend this much time doing this, since I feel like I have 1742530683 other things to do, but I let myself bask in it and just have fun. It also helps that I got a good amount done earlier. Switch laundry, start a new load, think about folding and pass until the next load is dry. Realize I’m starving and start a snack, even though it’s a weird time

10:10 (because nothing happens in a reasonable amount of time here.) Sit down to eat a quick brunch(?) – Quesadilla + cheddar + pepperoni with salsa and sour cream. Inhaled before the toddler could see and demand some. Confession: he came in right after I sat down because the dog heard me and I may or may not have bribed him into leaving me alone with half of a plain tortilla. #illnevertell #mylipsaresealed #spoileralert #itotallydid

11:03 : Owen is getting cranky so after diaper changes all around I decide to try and get him to take a nap.

11:07 : With unprecedented speed, Owen is alseep! I quickly toddler proof the house and take a super fast shower after giving Ryan milk (his fave) and putting on Blaze and the Monster Machines. (super fave) I know I have a few minutes, so I jump in and speed shower with the door open. Ryan comes in and flushes the toilet once, but that’s it…

11:35 :Owen is awake, so I feed him, move laundry around, and vacuum the house before making Ryan lunch.

12:15: Ryan ‘sits’ down for lunch – quesadilla with beans, plus grapes. By ‘sits’ I mean he runs from room to room coming back to take a bite here and there. Some days I fight it, today it’s not worth it. I also start getting food steamed for Owen and do the dishes.

1:45: To be honest, I have no idea what happened between then and this time. I know I tidied a few things, played with Ryan, fed Owen, broke up some fights, but it doesn’t seem like that was enough for an hour and a half? Anyway, around this time I started getting Ryan ready for his nap. He’s starting to get into this age where sleep is like a billion steps. Sometimes he doesn’t nap , sometimes he does, but I require him to stay in there for at least 90 minutes, for both of our sake. I need the break, he needs the down time. This time required a blanket from the couch, finding his ‘baby’ (stuffed bear), finding Blaze, tossing Blaze out, wanting it back, and at some point falling sleep.

2:15: Ryan finally falls asleep and I start working on Owen who is cranking. Nope. I give up and let him roll around. I work on a blog post and answer a few emails.

2:42 : The babe is asleep, though I have a sinking suspicion that it won’t be for long since as I put him down I smelled a smelly smell that smelled. Mail gotten, stew in a pot to heat up for lunch (leftovers discovered upon cleaning the fridge). I ran outside to go vacuum the car only to realize about 3 seconds in that I didn;t think to charge the vacuum after vacuuming the whole house. So that was a bust. I threw out some stuff and organized the toys but no cleaning.

2:55 : Sat down to work on this and another post while EATING. And praying that Owen wakes up after I’m done. Also, stew: fork or spoon? I’m using a fork but it feels weird. But a spoon feels weird too. IDK GUYS. I’m losing my mind.

3:10 :Owen wakes up. Not bad! I’ll take it. Food is still being eaten, but that’s fine. He hangs out in his jumper playing with Ryan’s toys (as all good little brothers do) while I accidently buttdial my dad and then chat for a couple minutes. I contemplate a cup of coffee until I decide on an eggnog latte truffle (OMG you guys, recipe coming Saturday, I think, if I can get my act together and edit photos in a timely manner.)

3:45 : Fear not, Owen has decided we live in a cruel world and he needs to let everyone know about it. I feed and console him until Ryan wakes up.

4:15 : Ryan wakes up. He’s a little cranky but I send him off with some raisins and he’s happy. I start to cut up some sweet potatoes and butternut squash to roast for Owen and start cleaning the house since Alex is on his way home.

5:15 : Start making Ryan dinner. I give him an egg with cheese, grapes, tomatoes, sweet potato and butternut squash. He eats the grapes. (insert side eye emoji here.) I also start boiling water for Alex. 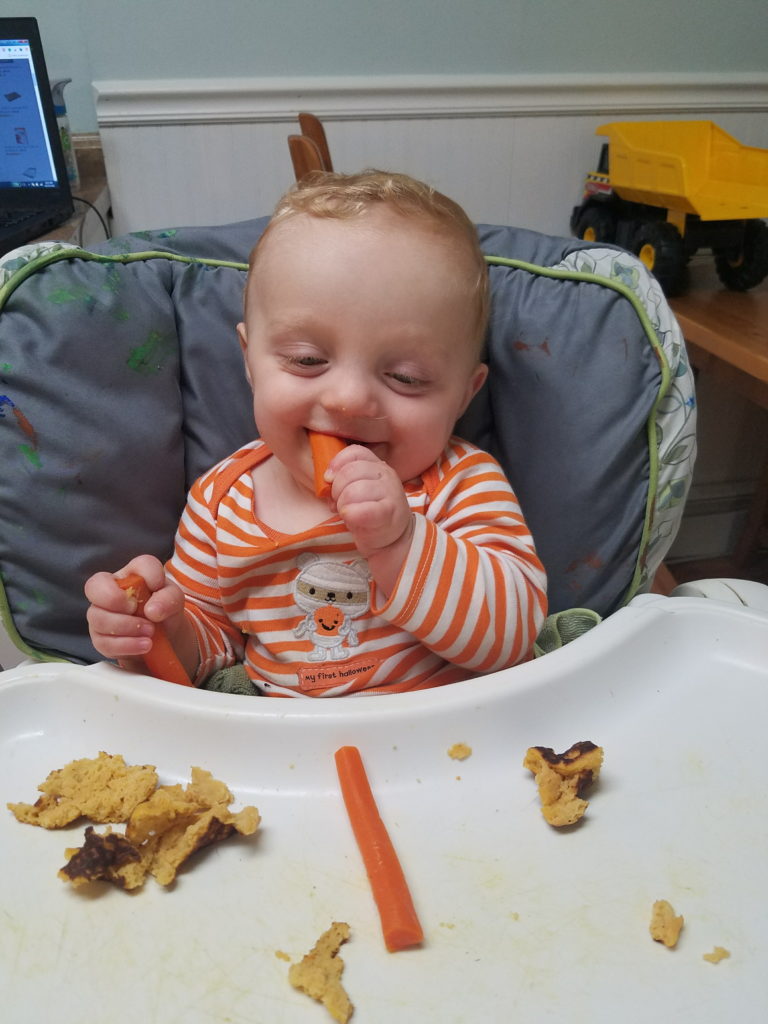 5:30 : Alex gets home and starts to make himself dinner. I set up Owen for a dinner of squash, sweet potato, apple, broccoli and mozzarella cheese. Spend the next 45 minutes trying to get everyone to eat without giving it to the dog. Do the dishes. (old picture)

6:15  : Start a tub for Owen. I try not to give both boys a tub on the same day, but I had to today, so it is what it is. Bathe Owen and then start getting him ready for bed while Alex watches Ryan.

6:50 : Owen’s asleep. It’s a bit early for him, but since I need to do a tub for Ryan it works out. Clean up and then start running a tub for Ryan.

7:15 : Ryan goes into the tub. I was his hair and body and then let him play. Spend 20 minutes telling him not to splash until owen wakes up and Alex takes over. Nurse Owen quickly and he falls back to sleep.

7:45 : Out of the tub, jammies on. Ready for bed. Rock Ryan a bit and then put him down where he will inevitably talk to himself for the next hour.

8:00 :  Heat myself up a bowl of the easiest minestrone I froze last week. Inhale it because I didn’t realize I was so hungry.

8:17 : Start working on finishing this post and other blogging thangs. Answer some emails.

9:25 : DONE for the night – I’m off my friends! Hanging out with Alex and the pup before bed. I’m sure Owen will wake up a few more time, and hopefully we’ll get to bed at a reasonable hour.