A little while I go I introduced a new series on the blog called, “Seeking Advice, Advice Found,” where I ask for advice on an issue in hopes that you all will chime in and provide me with all of your fabulous advice. I knew that this series was going to one of two ways: totally flop with no one pitching in or receiving so many amazing and well thought out comments. Boy am I glad that it went the second way! 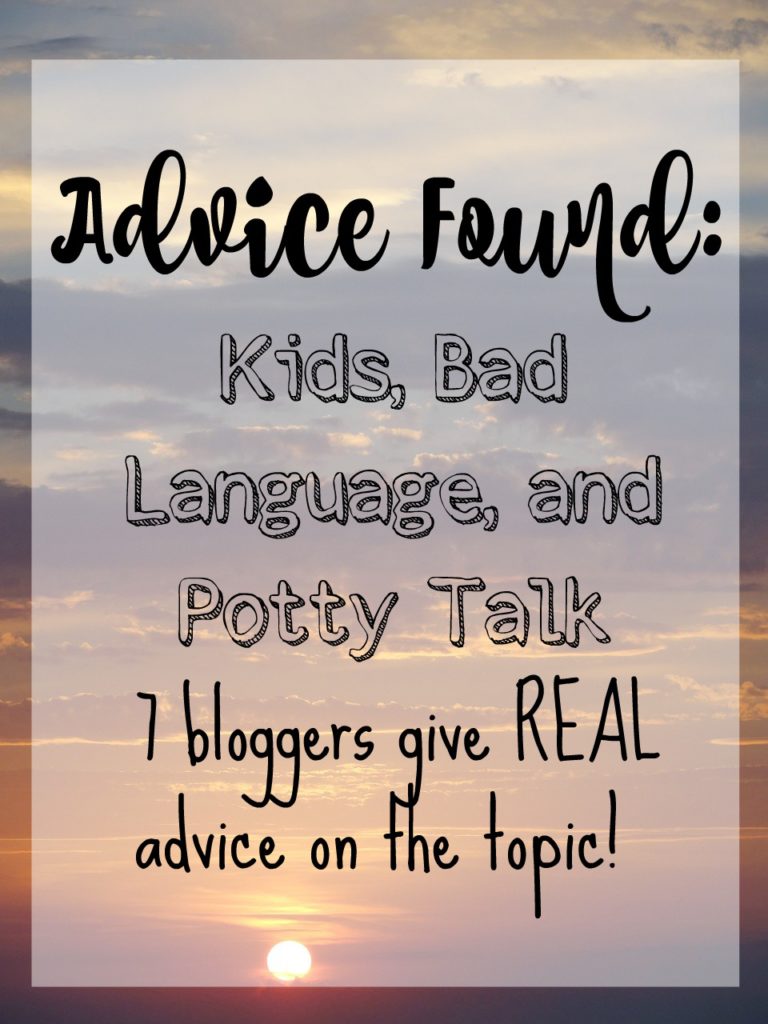 Below you’ll find some of my favorites from the comments section of that post, aka, the Advice Found. You can see all of the comments as well as my take on the issue on the post, “Seeking Advice: Kids, Bad Language and Potty Talk.”  I’ve linked the names with that person’s blog if applicable and would love it if you’d stop by their site and see some of what they’re about! Without further ado..

“For the potty talk, I grew up thinking it was hilarious but I learned when and where the best places to do that was. I wasn’t thinking it was okay to talk to random strangers about those things. For language, I grew up where it was not allowed and my parents never cursed either so I think I grew up knowing I shouldn’t be doing it. The only time I’ve ever heard my dad curse was when a car sideswiped us on a family vacation!”

Jessie from The Acquired Sass says…

“No kids here…but I do have a dirty, filthy, sailor mouth, so I know one day I’ll be crossing this same bridge. It seems like maybe identifying that the words are “grown-up” words & that there are better alternatives might be a good idea? But then again I did love me some “forbidden fruit” & still do…

As for potty talk…I think that talking about bodily functions is necessary & will help kids be in touch with how they react to things. Both in like how their tummy feels after certain foods & how to decide if they have to poop. That being said, maybe they need to know that it’s okay to talk to you & Alex about those things, but not other people?”

Emily from Queen of the Household says…

“I grew up in a home that didn’t use curse words or potty talk. But I now have a 2 yr old boy and know that potty talk is inevitable. I think that bodily functions need to be talked about openly at home so that kids don’t feel shame about their bodies. If parents allow their kids to safely talk about these things when they are young, then they will feel comfortable talking to their parents about bigger questions about their bodies when they are older. I will definitely be teaching my son when it is appropriate and when it is not to use potty talk. As far as cursing,  we will be teaching my son that those aren’t nice words and that sometimes people say them when they are upset. But the biggest thing that parents can do is to set the example and not curse themselves. Easier said than done!”

Rachel from Running on Happy says…

“Words are words. We curse a lot in our house, too, and both our kids went through phases when they repeated what they heard. Strangely, it happened when they were both about 2 1/2. At that point, they’re just emulating adults and really had no idea what they were saying. So, the way we deal with it now is that sure the ‘f’ word is a bad word but saying something like “f…..!” when you hurt yourself and something like “I hate you because you’re ugly” are two very, very different things. So yes, it’s not ideal to curse around your child and have them repeat it, they’re just words. Bullying and being hateful, on the other hand, are much more important to deal with in our house so we choose to focus on treating others with respect and the way we want to be treated rather than on bad words or potty talk.

I should add this is a MUCH different view than we previously had when we were first parents. Our son is almost 7 now, though, so our views have changed as he’s gotten older and in different social situations at school.”

“My son knows that “potty talk” is only in front of me and it’s a private thing. Fart talk is a whole other story. He will walk up to me and say “I have to tell you something” then fart, laugh and walk away. Ugh boys there gross hahaha i swear, but he knows better. He knows there for adults only. My son is 8 btw.”

Julie from Sum of Their Stories says…

“When our kids were small we tried our best not to swear around them but somehow they still manage to hear (and use in just the right context surprisingly) swear words even when they are too young to know what they are saying. It’s really funny but very important not to laugh (easier said than done!)
Once they go to school you have lost your battle, so then I think it’s just about teaching them when it’s appropriate (with their mates) and when it’s definitely not (around grandparents, teachers, church etc)

Talking about bodily functions – well, that has always been and always will be just about the funniest thing a 5 to 8ish year old boy can talk about! They find it hilarious for reasons I think only they know. I think the best you can do is attempt to moderate it by not making too much of a thing about it. It’s not funny, it’s not clever, we grown ups are not impressed, it’s not a big deal.
My boys are 19 and 17 and they don’t still fall about laughing about farts and poop thank goodness, it passes and for that we are all thankful!”

“Swearing – a tough one, but adults need to monitor themselves as best as they can and make their children understand that they are not nice or appropriate words and then model as such. Our 4 year old heard f-bombs from us (toe stubbing) and unfortunately we laughed the first time – bad idea. It became his thing to do when he wanted attention, especially when we placed him in timeout, to throw out the F bomb’s so we would come back and give more attention even though it was negative attention. We truly had to learn to just ignore it, and it has since decreased to almost no instances. It was really hard and there were several times that he would swear out in public to bring attention to himself, but the ignoring seems to have eventually worked.

As for potty talk, we use the word toot poop and pee only when we are talking about something serious, not to be silly or inappropriate. The 4 year old took to using those words for name calling at school and that was obviously no good. If you use those words to get attention in our home, he gets one warning and then it’s straight to timeout after that. This is probably going to be a long phase as well, but consistency helps. Stay strong parents, with a team effort that’s consistent kids will grow out of most phases! Also parents should always feel free to ask the child’s teachers or other educators for tips on how to curb these bad habits.”

I want to give a HUGE thank you to everyone who pitched in their 2 cents. It’s fascinating to me to see just how much of a variety there is on this topic! You all have given me SO MUCH to think about, and I’ve learned a ton. I hope everyone else has as well!

This is going to be a monthly feature here at Morgan Manages Mommyhood, so if you missed out on this month’s topic, be sure to come by for May’s topic –  strangers! I really think this one is going to be SO interesting. I post the question on a Thursday and the answers 2 Sundays later to give everyone a chance to leave their advice. Please sign up for my newsletter where I share exclusive tips, tricks, and thoughts as well as a summary of that week’s posts – that way you can be sure to leave your advice in time!

So tell me – who’s advice did you identify the most with? Who’s made you think the most? If you missed adding your advice but have something great to say on the topic, leave it in the comments!