According to a random percentage calculator, this baby is 87% cooked. Aka, I’m 87% of the way to being 40 weeks. (which, let’s be honest, isn’t going to happen probably.)  Baffling, you guys. As we get closer I get more excited (babies! brother! cuddling! not being pregnant! – jk, I love being pregnant) and more anxious (Ryan! being home alone with 2 kids! 2 under 2!) but I guess that’s all part of it, no? With 5 weeks left to go, it definitely feels like crunch time. I know for sure that at this point last time I was so much more prepared. I had everything we needed, my bag was packed, I made some food.. and waited. This time nothing at all. So unprepared hahaha. Either way, let’s get to the fun! 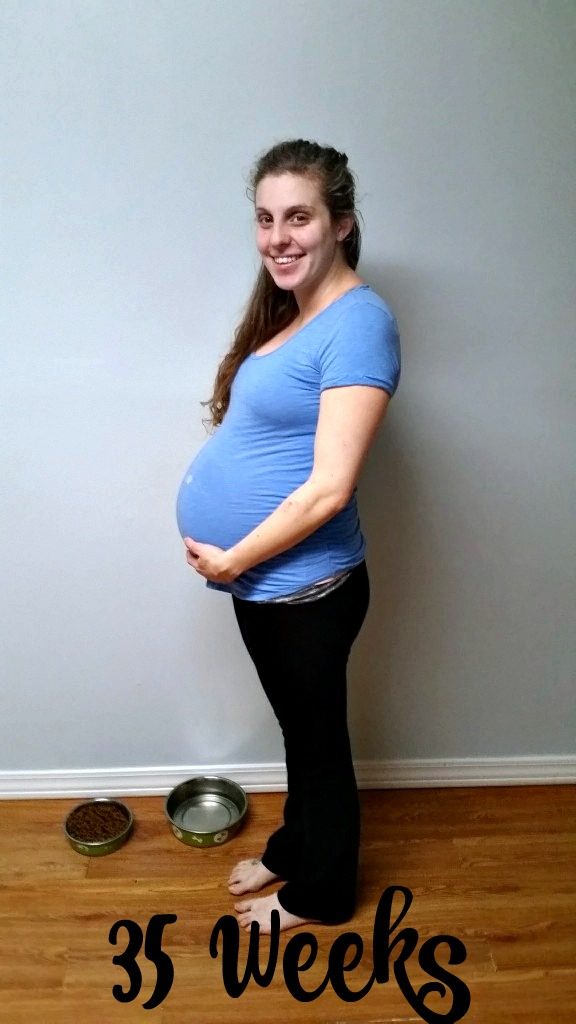 Cravings: Back to vinegar. And pizza, but at least that one was a little calmed when my dad bought me pizza on Friday 😉

Weight: Up 29 pounds from the day I found out I was pregnant. So smack in the middle of the suggested end weight. Hopefully I can keep it under 35 this time around!

New Things: Getting uncomfortable. I told you guys last week that this baby kicks HARD and he still does, but now it’s just on one side since he’s head down now. I also have a pretty constant pain on the lower (under?) belly right side that feels like I pulled something. It is mostly gone each morning, but as the day goes on and I chase Ryan around/clean house/live my life it gets worse. Probably a sign I need to chill out more (as Alex reminds me all day long) but there’s only so much I can do while home alone with a toddler. Such is life.

Also, random, huge spurts of exhaustion have happened this week. Like, sitting on the couch and drifting off, exhaustion. Not sure if the babe is going through a growth spurt or my body’s just prepping and trying to get more sleep, but it’s a pain. Hence the exhausted looking picture above ahaha

Preparation: Buying some things – clothes <333333 I took stock of what clothes we have from Ryan, threw out anything that was stained, had any holes, or that I didn’t like and never put Ryan in. (I also threw out any sleepers that were all snaps – the plus of being a second-time mom is remembering that sleepers with snaps are just stupid. Zippers all the way.) I made super I kept tally of what we had and bought a few essentials to fill in the gaps. Just the newborn stuff. Ryan was in newborn clothes for 6 weeks and they’re predicting this guy will be a peanut like Ryan was.

If you want to read out my past bumpdates, check out these posts!