Happy Sunday, friends! This is going up a little late because I forgot to even take pictures last night and remembered at 11 pm. Yeaup, wasn’t going to do it then. No thanks. Thankfully, someone woke me up crazy early at 5:45 so now that he’s been fed and entertained, I can get to posting my 16 week bumpdate! 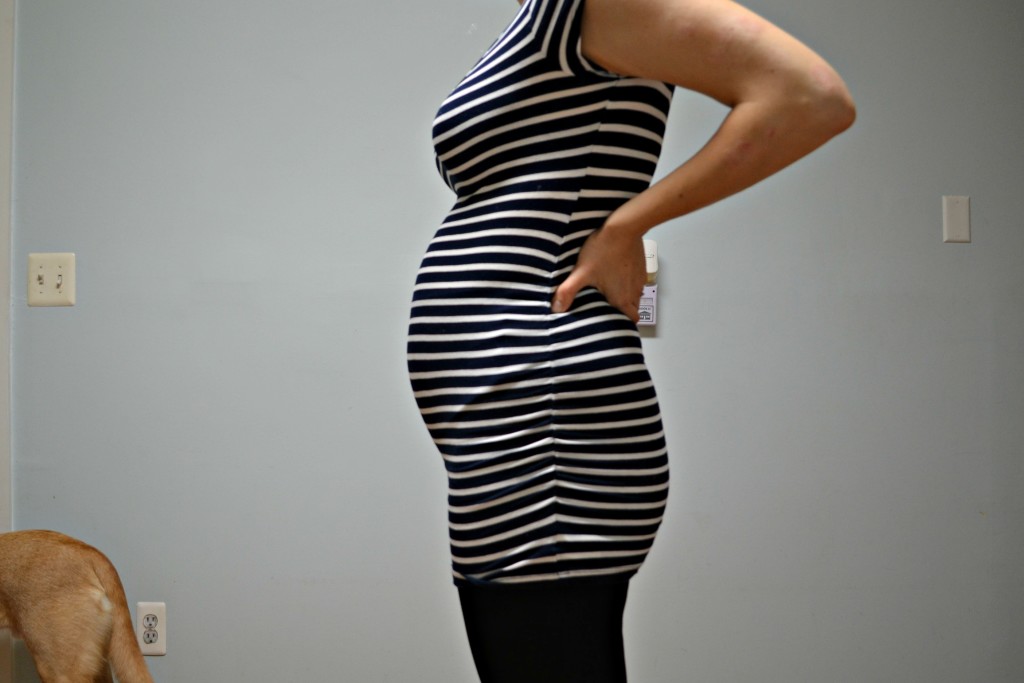 Please enjoy the dog butt, lack of face, bad posture and weird placement of my hand. It was 6:30, and my first born decided that last night was a party night, sooooo..

I told you guys that bump was growing fast and furious. It ain’t messin around, yo. Though, like last time, it’s weirdly flat dead center where my belly button is.

Symptoms: Thankfully, all my nausea is gone, unless I’m starving or thirsty. I was pretty symptom free this week except for the typical emotions and some weird round ligament pains. I remember getting them with Ryan, mostly when I sneezed, but they’re totally different with this babe (like everything with this pregnancy) and are lower and mostly when I stand up too quick.

Cravings: Still going hard on Chipotle. This is probably the only similarity between my pregnancy with Ryan. Even though I had Chipotle yesterday for lunch, when we were driving home from dinner I told Alex I wanted to stop for it. I was dead serious. Sadly, he did not give in, but I have my fingers crossed for lunch today. (Don’t think it’ll happen, insert sad violin)

Aversions: Not much, thankfully. It depends on the day, though. I guess the idea of pasta and red sauce is kind of gross to me. OH, and the smell of Alex’s favorite chicken sausage makes me sick to my stomach.

Sleep: It would probably be great, if not for Ryan. I don’t even know if he’s teething or what but he’s been up 1+ time per hour lately. Uggghhhhhhhh. Plus Alex has the cold from hell so he’s been a booger-y mess and everything keeps me up because I have mom ears.

Nursing: SO I’m trying to wean Ryan before the baby comes because personally I cannot do the whole tandem thing. BRAVO to those super moms who can, but personally nursing a newborn is hard enough without having to deal with a 2 year old who can’t sleep without it. I’m down to using only one side (as a precaution – my doctor told me that by 20 weeks I should at least get to one side in case he doesn’t stop, so that one side can get colostrum.) and we’ve cut out all nursing during the day. Now I only nurse him when he wake up in the middle of the night.  I’d like to say it’s only once or twice a night, but see above. My plan is to cut out the first nursing first, and then weekly progress to the who shebang, but first I want Ryan to get over this crankiness or whatever, since even nursing hasn’t been foolproof this week.

Anything Else? Pretty sure I felt movement! There’s definitely something going on in there. With Ryan it was very obvious at 17 weeks – he did one quick thump from the inside, like hey mom, I’m in here. Which now that I know him, makes a ton of sense. But this one seems more chill. Hopefully that will be reflected in him or her when the time comes. (uhh, 2 crazy kids? Oh boy.)

Okay, guys, that’s it! I’ll see you back here tomorrow for the best of the weekend!